An Environmental Agenda For The New Government 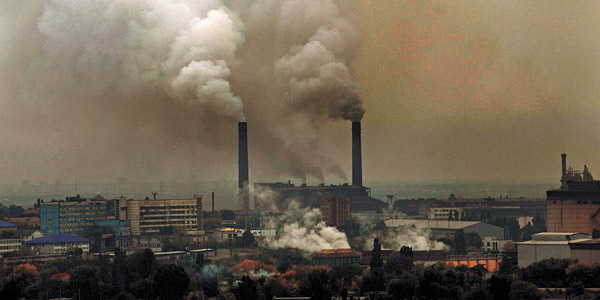 08 November, 2014
Print this article Font size -16+
The NDA government need to have a proactive and positive environment agenda. It must strengthen environmental oversight and not weaken regulations and must go beyond clearance of projects to take urgent steps for fixing air and water pollution as well as sanitation and regeneration of forests and water bodies and provide access to clean energy to all, said the Centre for Science and Environment (CSE) on the eve of the World Environment Day.

“On the eve of this World Environment Day, we are presenting our agenda for urgent action that we hope the new government will take on. We need to move beyond the rhetoric of environmental protection to implementing a tough action plan for change and this is what we want the government to do,” said Sunita Narain, director general of the New Delhi-based research and advocacy body and think-tank Centre for Science and Environment (CSE) in New Delhi on 4 June.

Narain was releasing an ‘Environment and Development Agenda’ for the newly elected NDA government at the Centre. This agenda is based on years of research by CSE on key environmental challenges.

Asserted Narain: “This agenda, we believe, will give us what we have always fought for -- an inclusive, sustainable growth. It will also show us how concerns of environment and development can be taken care of together, without being in opposition to each other. It is important that the new government has a proactive and positive agenda for environmental change.”
Clean the air

As far as air pollution is concerned, India sits on a ticking time bomb. Thirteen out of the 20 worst polluted cities across the world are in India, according to a recent World Health Organization study. An estimate by the World Bank shows that the health cost of particulate matter pollution accounts for 3 per cent of the country’s GDP.

So what should the nation do? CSE’s advice is:

• Introduce Bharat Stage IV fuel and emission standards across the country by 2015. Advance the roadmap for clean fuel and emission standards to leapfrog to Euro VI by 2019-2020.
• Implement a favourable taxation policy for promoting clean fuels like CNG and in Budget 2014, introduce a tax on diesel vehicles.
• Increase Central funding substantially to scale up affordable modes of public transport system in cities. Introduce the ‘million bus programme’ and make the right to walk and cycle non-negotiable.
• Restrict the use of personal vehicles by introducing higher taxes and use the urban reform agenda for higher parking charges
Healthy rivers are crucial

Every river in India is like the Ganga -- either dying or already dead-- as cities take water from them and return sewage, and industries discharge effluents into them. The strategy of river cleaning by building sewage treatment plants has proved to be inadequate. The Ganga revival programme will only work if we learn to do pollution control differently. Reinventing the strategy for river pollution control is the agenda, not cleaning rivers in the business as usual mode.

This is what the government needs to do to plug the gap
• Make ecological flow mandatory in all stretches of a river.
• Accept that urban areas cannot build conventional sewage networks at a required pace.
• Ensure treated effluent is reused or discharged directly into rivers for dilution.
• Go for affordable water and sanitation solutions.
• Design a garbage disposal system to segregate waste and make a resource out of it.
• Learn that controlling industrial pollution demands effective enforcement of laws and appropriate technologies for small-scale industries.
• Aggressively implement the national sanitation programme – make it a top governmental priority. Make it clear that toilets are more important than temples.
Reinvent the way green clearances are managed

Industry portrays green clearances as impediments to growth, but the fact is very few projects get rejected in India on environmental grounds. Official incapacity to monitor a developer’s compliance with environmental conditions means developers can pollute without any checks.

Says Chandra Bhushan, deputy director general of CSE, “The new government must reform and strengthen the environmentmanagement systems and green clearance processes to safeguard people’s concerns, and we have a prescription on how they can do it.”

• Consolidate all green clearances – environment, forests, coastal and wildlife -- so that decisions can be taken understanding the overall impact of projects.
• Instead of several regulators, set up an independent body to grant green clearances.
• Utilise the resources of State Pollution Control Boards (SPCBs) to monitor compliance with clearance conditions. Focus on project monitoring, not just project clearance.
• Build capacity and reform institutions for better implementation of regulations. Immediately strengthen pollution control boards.
• Strengthen the process of public hearings and public participation in green clearances. Make these processes more transparent and accountable.
• Set up urgent task force to look at how enforcement and penalties for environmental non-compliance can be vastly strengthened. Need tough action that hurts. Not words.

Harnessing the development potential of the Forest Rights Act
Ensuring livelihood and food security of the poorest of the poor is at the core of this legislation. Seven years on, the Act is yet to live up to expectations. The new government must implement FRA in letter and spirit and include it in its key development agenda, says CSE.

• Implement the next phase of FRA focusing on community forest rights and forest regeneration with people.
• Introduce minimum support price forall minor forest produce and make it a mission to bring livelihood benefits of forests to people.
• Provide new direction for forest protection that builds green wealth in the hands of people; measure and account for forest wealth in order to provide protection to natural habitats and to share wealth with people and build an effective agenda for co-existence, so that benefits of conserving wildlife are shared with local people and conservation is durable and effective
Tap renewable energy to ensure energy access

About 306 million Indians, mostly in rural areas, do not have access to electricity. Though energy access issues need to be addressed, coal-based power generation is the largest source of carbon emissions in the country. The new government must strike a a balance between energy security and its impact on health and climate.
• Work to achieve the goals of the Rural Electrification Policy to provide at least one unit (1 kiloWatt-hour) of electricity per day to every rural household by 2019.
• Frame policies so that the share of renewable energy increases from 3 per cent to 25 per cent by the end of the 12th Five Year Plan.
• Frame a policy for decentralised energy generation through mini-grids so that clean energy can be used to bring energy access to millions without lights. Use the Clean Energy Funds for this clean energy revolution.
• Frame a policy for roof top solar so that people can bring in the new revolution from their homes.
Rural development

Programmes for rural development are in place -- the challenge is to match the UPA’s rural development budget and to fix the shortcomings in the delivery of development benefits to the right people.
• Reform MGNREGA for development so that assets are created and employment is used productively.
• Build climate resilience and water security through the MGNREGA programme. Focus on how water harvesting systems can be used for food, nutrition and livelihood security in an increasingly climate-at risk world.