New Delhi [India], February 15 (ANI): Megastar Amitabh Bachchan, marked his 52 years in Indian Cinema on Monday and shared then and now throwback pictures of him on social media.
A fan on Twitter shared a monochromatic collage of Bachchan contrasting his two pictures from the year 1969 and the recent one.
Reposting the tweet, the 'Don' star wrote, "aaj hi ke din film industry mein pravesh kiya tha .. Feb 15, 1969 .. 52 years !! aabhaar" (Had entered the film industry on this day .. Feb 15, 1969 .. 52 years !! Thank you) 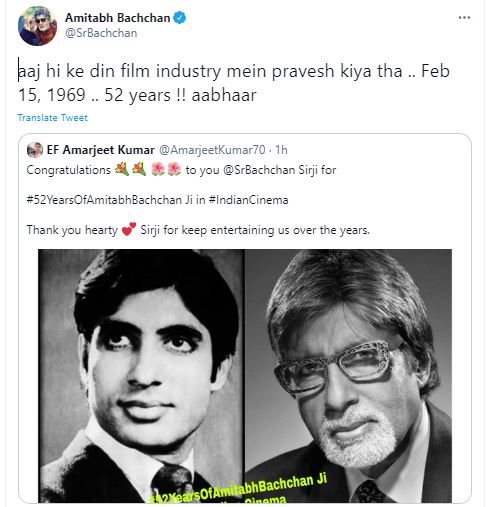 The 'Kaun Banega Crorepati' star host shared various tweets from his fans who congratulated him on this special day.
In 1969 on November 7, Bachchan's first film 'Saat Hindustani' had released, and to commemorate this journey, several fans chimed to the social media accounts of the megastar. He is called as 'Mahanaayak' of the Indian film industry for his unmatchable contribution to Bollywood.
Bachchan's last onscreen appearance was in 'Gulabo Sitabo' alongside Ayushmann Khurrana. The 78-year-old actor will be seen engaged with many projects in the upcoming days like Ayan Mukerji's 'Brahmastra', co-starring Alia Bhatt and Ranbir Kapoor, 'Chehre' with Emraan Hashmi, sports drama 'Jhund' starring the 'Sairat' actors Akash Thosar and Rinku Rajguru.
The veteran actor will also be seen in Nag Ashwin's untitled film with Deepika Padukone and Prabhas which he recently signed. (ANI)