New Delhi [India], October 12 (ANI): Former India legendary batsman Sachin Tendulkar on Monday congratulated Lewis Hamilton for matching the career win record of Michael Schumacher with his 91st Formula 1 victory at the Eifel Grand Prix, triumphing over the Red Bull of Max Verstappen at the Nurburgring, as Daniel Ricciardo secured his first podium for Renault.
Taking to Twitter, Tendulkar wrote, "Since the time you've taken up the sport, you've been very special. I have always liked your grit and balanced aggression while driving the @F1 car. Congratulations on your 91st GP win equalling Schumacher's record. Wishing you the very best for the future." 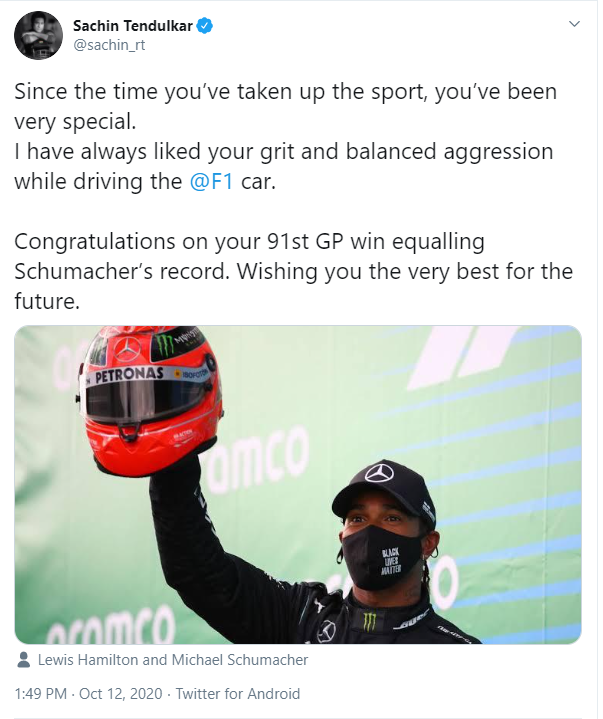 Hamilton had been outmuscled by his pole-sitting teammate Valtteri Bottas at the start of the race, but passed the Finn on Lap 13 of 60 after Bottas locked up at Turn 1 - before a loss of power forced Bottas into retirement six laps later, Mercedes's first DNF of 2020.
From there, Hamilton then had a relatively comfortable run to his record-equalling win, overcoming a Safety Car restart - coming after McLaren's Lando Norris who had retired on Lap 44 - to win from Verstappen by 4s, Hamilton's victory poignantly coming in front of Schumacher's son Mick, who was due to drive in Friday practice for Alfa Romeo this weekend, and on Schumacher's home turf to boot.
Ricciardo headed off the Racing Point of Sergio Perez, who came home P4, ahead of the sole remaining McLaren of Carlos Sainz - while a stealthily brilliant race from AlphaTauri's Pierre Gasly saw him take P6 after a late pass on Ferrari's Charles Leclerc.
The Monegasque just managed to hold off the second Racing Point of super-sub Nico Hulkenberg, who did a fine cameo job in place of Lance Stroll to jump from P20 to P8.
The top 10 was rounded out by the Haas of Romain Grosjean in P9, taking his first points of the season, while Alfa Romeo's Antonio Giovinazzi claimed the final points-paying position, just holding off the Ferrari of Sebastian Vettel. (ANI)