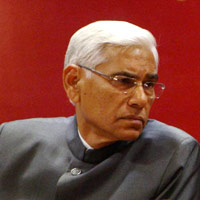 As he prepares to demit office tomorrow after an eventful tenure at the head of the Constitutional financial watchdog, he strongly defends the reports including on 2G spectrum allocation during his term that had triggered a number of controversies and raised the hackles of the government, and bringing in the concept of presumptive loss in audit.

He says at no time during the turbulent days the thought of quitting came to him when he was attacked from several quarters.

After a five-and-half year tenure in the office, Rai also backed demands for a collegium type of selection for CAG though he was not very sure about the effectiveness of a multi-member body.

Targeted by those in government as exceeding the mandate by going into policy formulations, he makes it clear that by nature audit has an adversarial function and it cannot praise government policies.

"All PPPs, PRIs and ULBs (Urban Local Bodies), societies, etc should be brought under the CAG," Rai, who turns 65 tomorrow, told PTI in a wide-ranging interview.

Asked whether NGOs taking government aid should be brought under the purview of CAG, he said, "That's right, the special societies."

Citing the example of National Rural Health Mission executed by societies getting hundred per cent funds from government, Rai said, the government had requested the CAG to do the audit and they did it. "But probably, it would be more advisable to bring it within the automatic legal mandate of the CAG."

The PPPs which have become the preferred mode for executing infrastructure projects in airports, highways and ports are outside the purview of the CAG audit at present.

Only special audits are done where the government makes a request.

Rai sought amendments to the CAG Act of 1971 to keep pace with the changes in governance.

"The Act needs to be updated. For example, after the 74th and 75th amendments, came PRIs and ULBs institutions that have come into government's channels for delivery of schemes.

Similarly, PPP models have been achieved. These all need to be covered under the CAG Act", he said.

In a presentation made before the Planning Commission a few years ago, it was revealed that 60 per cent of the government expenditure does not come under the purview of the CAG.

Rai, who remains unfazed by attacks especially from some in the government over the audit reports, says, "I don't call them attacks".

To every issue, he said, there was a counter issue and every argument had a counter argument. "These are debated in Parliament and outside Parliament. So we have never taken it as any controversy or attack upon us because all our reports are debated in the PAC," he added.

Today media being so alert and predominant, some of these issues come into public domain and get debated, he said.

Asked if ever the thought of quitting crossed his mind in the face of severe attacks over his reports, especially on 2G and coal allocations scams, he said, "Never, never. In fact, we never had any attacks of that kind. Every argument has a counter argument. If you give your views, obviously somebody will give his counter views.

"There are two sides to a coin. In fact, I have always had great regards for my colleagues in this department who despite reading all this in the media had never swayed from the path of totally objective auditing," he said.

Rai strongly defended the concept of presumptive loss in arriving at under-recoveries of the government in spectrum allocation and other matters.

"The external audits we perform is post the event. So we are guided by hindsight only. That is usually the allegation and that is exactly how external audit functions", he said.

Asked about his comments that he felt sorry for those who had propounded zero-loss theory in spectrum auction, an apparent reference to minister Kapil Sibal's remarks, the CAG said, "I feel sorry for the nation if anybody believes that there has been no loss." .