Aliens Get A Foot In 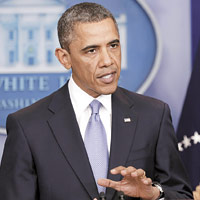 08 November, 2014
Print this article Font size -16+
The US Senate approved a landmark immigration Bill providing 11 million undocumented immigrants, including over 240,000 Indians, a chance to become citizens. The Bill, however, retained killer provisions with regard to H-1B visas that would impact Indian firms in the US. The key legislation received bipartisan support as the Senate passed it with a strong 68-32 vote. Even though controversy raged over how much new border security was needed and how long the 11 million should wait before becoming legal residents and then citizens, President Barack Obama appreciatively said the Bill contained tough border security requirements and “earned citizenship” for the undocumented residents. The Bill now moves to the House of Representatives before it can be sent to Obama to sign into law. The President urged the House to pass the Bill by August.

Lax Tax
US firms face the highest federal corporate tax rate in the world. But there’s a big difference between the official rates and the cash collected. US firms paid an average tax of 12.6 per cent in 2010, said a Government Accountability Office report that analysed taxes paid by US firms worth $10 million-plus. The corporate tax rate is 35 per cent, but due to tax credits, exemptions and offshore tax havens, the actual tax burden of US firms is much lower.

Done Deal
A US federal judge approved HSBC Holdings’ record $1.92 billion settlement with federal and state investigators on charges that it flouted rules designed to stop money laundering and thwart transactions with countries under US sanctions. While noting “heavy public criticism” of the settlement, which enabled HSBC to escape criminal prosecution, a US district judge called the decision to approve the accord “easy, for it accomplishes a great deal”.

No Takers
Euro zone unemployment is at a record high and consumer prices are being driven upward by volatile energy and food prices, according to recent data from Eurostat. This underlined the fragility of the bloc’s economic health. Inflation in the 17-nation euro zone, which is suffering from its longest ever recession, increased to 1.6 per cent year-on-year in June from 1.4 per cent in May. Joblessness in the bloc stood at a record 12.2 per cent in May, with the number of people out of work rising further above 19 million.

For God’s Sake
Two top officials at the Vatican Bank have resigned as the Holy See comes under growing pressure to clean up its finances. Director Paolo Cipriani and his deputy Massimo Tulli resigned as Italian prosecutors continue a three-year investigation into the bank, formally known as the Institute for the Works of Religion. The investigation led to the arrest of a Vatican official in June — a financial broker and a former secret service police officer over an alleged attempt to smuggle millions in cash into Italy, according to Rome’s prosecutor.

The Vatican made no reference to the arrest or investigation when announcing the resignations but stressed the need to accelerate efforts to repair the bank’s reputation.

Eye Spy
The EU recently ordered a security sweep of its buildings after reports that a US spy agency had bugged EU offices in Belgium and the US. The EU is demanding a clarification from the US after the spying allegations were reported by German magazine Der Spiegel, which quoted from a September 2010 “top secret” US National Security Agency (NSA) document that outlines how the NSA bugged offices, not only listening to conversations and phone calls but also gaining access to emails.

Revolution Redux
Egypt’s army overthrew elected President Mohamed Mursi, delighting millions who hated Islamist rule but incensing his supporters, who see the military coup posing a threat to democracy. Many Muslim Brotherhood leaders have been arrested. The fall of the first elected leader to emerge from the Arab Spring revolution raised questions about the future of political Islam. The top judge of Egypt’s constitutional court, Adli Mansour, is to be sworn in as interim leader.

New Script, Old Story
PM Shinzo Abe has prescribed a low-cost, low-return culture for Japan’s public pension fund — the largest in the world. The Government Pension Investment Fund has no record of success of the kind Abe pledged to deliver. If the fund’s returns — around 2.4 per cent a year — falter, the cost of supporting public pensions could rise for taxpayers, payouts could fall or it could be both. Twenty per cent of Japan’s population will be pensioners over 75 years old by 2030, say analysts.

It’s About Time
Apple is said to have applied for a trademark for the ‘iWatch’ in Japan, signalling that the iPhone maker may be moving ahead with plans for a watch-like device as gadget makers turn their attention to wearable computers. The trademark application would cover computers, computer peripherals and wristwatches. It is unknown how long the application process would take. Speculation has mounted that Apple is preparing to launch an iWatch after CEO Tim Cook told a gathering of tech and media executives earlier this year that wearable products were ripe for exploration.

Dim Hope
China’s services sector expanded modestly in June with the vast construction industry acting as a drag on output, in a further sign that the world’s second-largest economy is losing momentum. A lacklustre services sector won’t help buffer a deeper slowdown in manufacturing. A pair of purchasing managers’ indices stayed above the watershed line of 50, which divides expansion from contraction but the readings were not strong enough to calm worries about China’s slowdown.

Thai Curry
Japan’s Mitsubishi UFJ Financial Group will buy a controlling stake in Thailand’s Bank of Ayudhya for up to 560 billion yen as Japanese lenders expand into fast-growing South-east Asian economies to beat slower growth at home. The deal needs to be approved by the Thai government as foreign ownership in domestic banks is capped at 49 per cent. MUFJ may merge its Thai operations with Ayudhya to comply with Thailand’s single-presence policy on bank ownership.