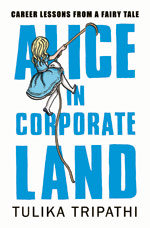 08 November, 2014
Print this article Font size -16+
It was a warm spring day in April. Alice was filled with relief and a creeping sense of excitement as she rushed along the busy sidewalk towards her modest home, which was located just a few streets away, on Pennyworth Lane. There was a spring in her step and a smile on her face as she wove through the onslaught of the evening pedestrian traffic. The past year had been tough, but things were finally looking up. After all her struggles, tomorrow would provide the fresh start she so sorely needed.

Alice turned into a side lane, the crowds around her melting away as she entered a quieter residential neighbourhood. So much had happened, she barely had time to digest it all. As she strolled through the tree-lined avenues, her mind wandered back to the events of the preceding year.

Alice had always been a diligent student and had graduated with a first-class degree in economics from a reputed university a year ago. She remembered her graduation ceremony as if it were just yesterday. The auditorium was filled to capacity with her classmates and their families. Her parents were seated in the fifth row on the left, in the area designated for families. Her mother, a schoolteacher, had worn her favourite pearls for the occasion and shed tears of pride which she periodically dabbed with her white handkerchief. Her father, a pharmacist, had worn his only suit and sat with a solemn expression. Alice’s name had been announced on the Dean’s list, she had walked up on to the stage to collect her degree amidst the applause of all her classmates. After the ceremony, her father had put his arm around her and squeezed her shoulder. He was a man of few words but she knew that he was proud of her that day. She remembered feeling as if the world were her oyster. Armed with her degree, she could now walk into a job of her choice and be on her way to success!

Boy, how wrong she was!

The following months had been difficult as jobs were scarce, particularly for people without any prior work experience. In fact, as the economy had been struggling for a few years now, she was competing for jobs with people who had graduated one, two or even three years before her.

She thought back to her first post-interview rejection letter. What had made it worse was that she had been so sure that things had gone well. She remembered feeling that she had secured the job when the interviewer had smiled and told her that they would get back to her very shortly. As she waited with anticipation, a curt email arrived:

Dear Ms. Alice,
We would like to thank you once again for your interest in working with our company. Unfortunately, in this instance we have not retained your candidature as we found other candidates who had more relevant prior experience for the role. We wish you success in your job search…

Alice felt so disappointed that she shut herself in her room, flopped down on her bed and sobbed for what seemed like hours. How would she ever gain experience if no one gave her the chance to get any?

Papa had come to her room and tried to console her. When she had calmed down, he had asked her to try and remember again what it was that she was trying to achieve.

‘Then you should be thrilled! You were successful in getting a job interview when many others were probably not even invited for one. Interviewing is a skill and you learned some of it today,’ Papa responded.

‘What you have done so far has made you who you are now. It has made you the diligent, responsible girl that you are today. It is not what you have already achieved, but rather what you do now that will define your success.’

Alice wiped her tears and listened more intently. He was right: feeling that she had done her share of the work and blaming the world for her setbacks was not going to get her anywhere.

‘You will always have two choices, Alice. Focus on the positives and let them energize you and egg you on, or stress on the negatives and let every failure bring you down. The decision on how you interpret the world and events around you every moment and every day is yours. You can’t control what cards you will be dealt, but you can control how you play them. The winners of poker tournaments are not always the players with the best cards,’ Papa concluded softly.