Mumbai (Maharashtra) [India], February 24 (ANI): Congratulations poured in for Alia Bhatt who on Wednesday after the release of a teaser of 'Gangubai Kathiawadi' , in which she plays the lead.
Taking to Twitter, global star Priyanka Chopra Jones appreciated the 'Student of the Year' actor and wrote, "Alia!!!! I'm so proud of you my friend for stepping into complexity fearlessly. I hope you always keep shining. Presenting- Gangubai Kathiawadi! Congratulations Sanjay sir and team." 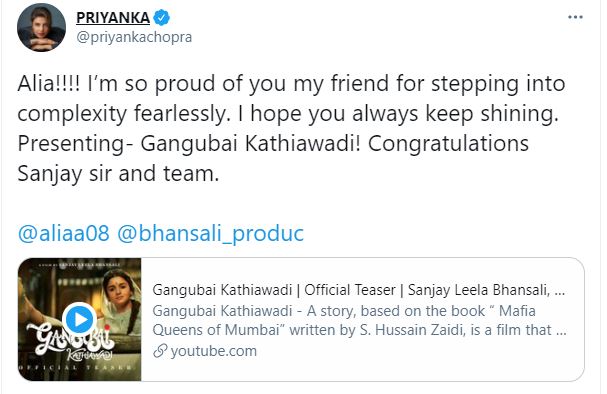 Looking forward to the intriguing movie, superstar Akshay Kumar also sent their best wishes to the team and wrote, "#GangubaiKathiawadi...had found the title itself very intriguing from the day I'd heard it...the teaser only adds to it! @aliaa08 along with #SanjayLeelaBhansali sir bring their A-game again, so looking forward to it," using a clapping hands emoticon. 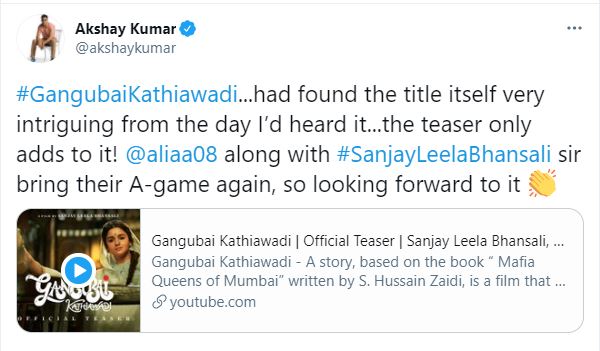 Ace filmmaker Karan Johar also appreciated the team efforts on the enthralling movie and wrote, "With @aliaa08 and #SanjayLeelaBhansali working together, it's bound to be magical.... What a brilliant teaser! Super super proud of you baby girl! Can't wait to see this on the big screen! Fire @bhansaliProductions #GangubaiKathiawadi," using a fire emoticon.

Veteran film actor Neetu Kapoor also shared the teaser of the movie on her Instagram stories and wrote, "Outstanding @aliaabhatt absolutely brilliant," with thumbs up emoticon. 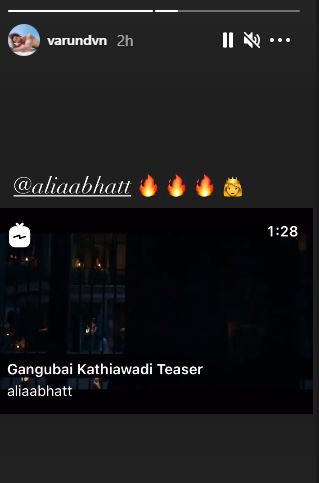 Varun Dhawan also shared the teaser on his Instagram stories with fire emoticons. 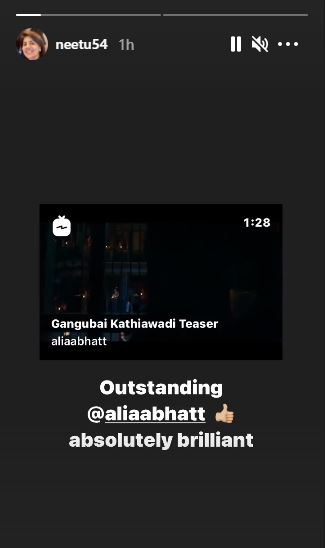 The teaser of Sanjay Leela Bhansali's 'Gangubai Kathiawadi' starring Alia Bhatt was dropped on Wednesday, on the occasion of the film director's 58th birthday.
The film based on one of the chapters of noted author S Hussain Zaidi's book, 'Mafia Queens of Mumbai' also stars Ajay Devgun in a special appearance.
The one-minute-thirty-second-long teaser by Bhansali, famed for his grand cinema shows Alia Bhatt in a never-seen-before avatar as she portrays an eponymous character in the flick.
The makers have announced the theatrical release date of the film on July 30 this year. 'Gangubai Kathiawadi' will mark Bhansali's first collaboration with Alia. This project will also see Bhansali Productions collaborating with Jayantilal Gada's Pen India Limited. (ANI)