New Delhi [India], February 16 (ANI): Showcasing photography skills of her co-actor and Bollywood superstar Akshay Kumar, actor Kriti Sanon, on Tuesday treated fans with a sunkissed picture of herself.
'Panipat' star, who is currently shooting for Sajid Nadiadwala's 'Bachchan Pandey' in Jaisalmer, took to Instagram and shared a stunning closeup picture of herself from the sets of her forthcoming movie and teased that it was clicked by the 'Khiladi' star, Akshay Kumar.
In the picture, the 'Raabta' actor is seen sporting a no make-up look. Kriti looks alluring as she donned dark mascara eyes and a dark pink lip shade while she effortlessly poses for the lens.
With the scintillating picture, Sanon noted, "When Bachchan Pandey a.k.a @akshaykumar turns photographer..," using a camera and shining hearts emoticons. 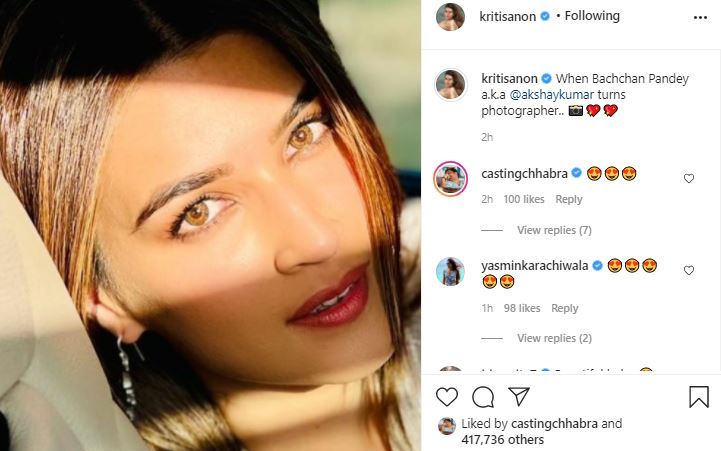 With the post hitting the photo-sharing platform, it garnered more than four lakh likes while scores of the 'Heropanti' star's fans chimed into the comments section and left fire and lovestruck emoticons.
Sanon keeps on sharing the BTS pictures from the sets of her upcoming film 'Bachchan Pandey'.
Earlier, she also announced that she has joined the star cast of Tiger Shroff starrer 'Ganapath' as a lead. She also revealed her first look on social media and introduced the character named Jassi. This collaboration will mark her third project with Tiger Shroff after they both debuted in the 2014 flick 'Heropanti' and their T-series music video 'Chal wahan jaate hain'.
Meanwhile, her upcoming film, which stars Akshay Kumar in the lead, is being helmed by Farhad Samji and bankrolled by Sajid Nadiadwala. It will hit the theatres on January 26, 2022. Apart from Akshay, and Kriti, the film also features Jacqueline Fernandez and Arshad Warsi.
The flick will reportedly be shot in places like Gadisar Lake and Jaisalkot. Akshay's character in the film is a gangster who aspires to be an actor, while Kriti essays the role of a journalist, who harbours dreams of becoming a film director. (ANI)