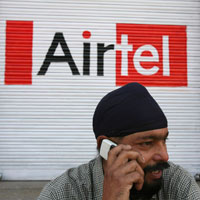 08 November, 2014
Print this article Font size -16+
Bharti Airtel is in talks to buy out Mumbai-based Loop Mobile in a deal that will give the telecom major about 3 million customers.

Loop, which owns a mobile telephony licence for the Mumbai circle, is in negotiations with Airtel and other telecom firms to sell its business in a Rs 750 crore deal.

Loop Mobile has debt of Rs 400 crore, which is likely to be included in final deal size.

While Loop and Airtel declined to comment, sources privy to the negotiations said Loop was in talks to sell both its mobile and tower business.

Loop holds 8 megahertz of spectrum in the premium 900 MHz band, which as per latest base price, is valued at Rs 2,624 crore. The operator has about 2,000 operational mobile tower sites, of which 500 are company-owned.

A successful deal will reduce the number of claimants for the premium 900 MHz band in the Mumbai service area. Airtel had 4.1 million customers in Mumbai at the end of September and was ranked third in terms of subscribers.

The addition of Loop Mobile's customer base would make Airtel the top operator in Mumbai, where Vodafone is currently the market leader with 6.8 million customers.

Mukesh Ambani-led Reliance Jio Infocomm yesterday applied to participate in the spectrum auction and bid for the scarce 900 MHz band, which is crucial for both Bharti Airtel and Vodafone.

The government plans to auction 16 MHz of spectrum in the 900 MHz band each in Delhi and Mumbai and 14 MHz in Kolkata.

Applicants have to bid for a minimum of 5 MHz.

Loop has decided to skip the spectrum auction scheduled on February 3. Its Mumbai licence expires in November and the company is required to bid afresh for airwaves to continue operations.

The company had approached the telecom tribunal TDSAT for its right to get the license renewed and said it is willing to pay market-determined prices for airwaves if the renewal is granted.