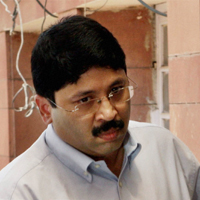 08 November, 2014
Print this article Font size -16+
The Enforcement Directorate on Monday (8 September) withdrew from a Delhi court its plea seeking issuance of letters rogatory to Malaysia and Mauritius in the Aircel-Maxis deal case, in which former Telecom Minister Dayanidhi Maran among others has been named in the CBI charge sheet.

ED told special judge O P Saini, who is exclusively dealing with the 2G scam-related cases, that its application pending before the court may be "dismissed as withdrawn" and it should be given liberty to file fresh plea, if needed, in this regard at a later stage.

ED's move came days after CBI, on August 29, had filed a charge sheet in the case against eight accused, including four firms, alleging that Dayanidhi Maran had received a bribe of over Rs 700 crore for purportedly coercing Chennai-based telecom promoter C Sivasankaran to sell his company Aircel to Malaysia-based Maxis.

The other two companies named by CBI in the charge sheet are ASTRO All Asia Network PLC and South Asia Entertainment Holding Ltd, which was allegedly managed by the Marans.

They have been charged for the offences punishable under section 120-B (criminal conspiracy) of the IPC and under relevant provisions of the Prevention of Corruption Act.