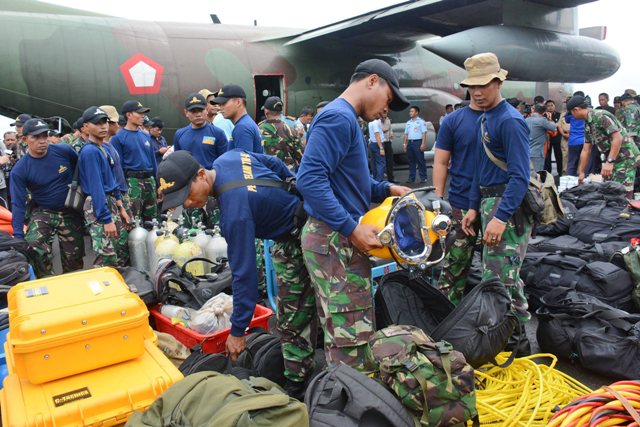 14 January, 2015
Print this article Font size -16+
Searchers using sonar equipment on Wednesday located the wreckage of the ill-fated AirAsia plane carrying 162 people at the bottom of the Java Sea off Indonesia, even as bad weather hampered the recovery of many bloated bodies seen floating around the crash site.
Searchers using sonar equipment have located wreckage from AirAsia Flight QZ8501 at the bottom of the Java Sea, an Indonesian search and rescue official said.
At the moment, they still do not know if it is in one piece or broken up, the official said.
Three days after the Airbus A320-200 went off the radar, its debris was found on Tuesday in the Karimata Strait near Pangkalanbun, Central Kalimantan.
Divers were to be deployed to search for bodies and for the plane's "black box" flight recorders but officials said heavy rain, strong winds and waves of up to 3 metres had forced them to suspend the operation.
At least seven bodies have been retrieved from the sea till now. Three bodies, two female and one male, were recovered on Tuesday while four more were pulled out on Wednesday.
One of the bodies pulled out was dressed in air stewardess uniform, said Bambang Soelistyo, chief of Indonesia's search and rescue agency Basarnas.
Many bodies were seen floating in the sea by the rescuers and efforts were being made to retrieve them, officials said.
"We are in a wait and see. Weather is bad currently. High tides and heavy rains. Every element is now in their position ready to make a move when weather improves," Soelistyo said.
"As soon as the weather is clear, the bodies will be brought to Pangkalan Bun," he said.
Authorities in Surabaya made preparations to receive and identify bodies, including arranging 130 ambulances to take victims to a police hospital and collecting DNA from relatives.
Indonesian officials confirmed that remains and debris found in the waters off Borneo are from the AirAsia plane that took off from Surabaya for Singapore.
Relatives of the 162 people on board the ill-fated plane hugged each other and burst into tears as they watched television footage of bodies floating in the sea.
The plane was carrying 155 passengers -- one British, one Malaysian, one Singaporean, three South Koreans, 149 Indonesians -- and seven crew members -- six Indonesians and a French co-pilot.
The mystery still remains over why the plane lost contact with air traffic control and what happened afterwards.
The plane was flying at 32,000 feet (9,753 meters) and had asked to fly at 38,000 feet, but when the air traffic control gave permission for a rise to 34,000 feet a few minutes later, there was no response.
Some bodies recovered from the sea were fully clothed and one was wearing a life jacket, which could indicate the Airbus A320-200 was intact when it hit the water. That would support a theory that it suffered an aerodynamic stall.
Investigators are focusing on the timing of the crew's request to climb to a higher altitude, Reuters reported citing an unnamed official.
"We know that the weather was very bad in this area, there was a storm," said the official.
"Why did he (the pilot) request to climb at that stage? Should he have climbed earlier? Other aircraft were flying at a higher altitude in that area. How did the two pilots react to the weather? We are asking those questions."
(Agencies)
Tags assigned to this article:
news 5 aviation airlines singapore airasia indonesia malaysia flight qz8501