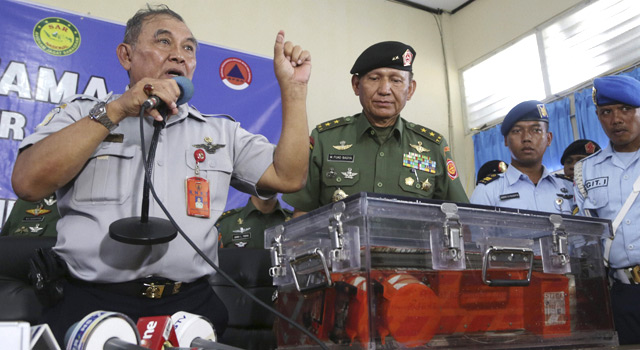 22 January, 2015
Print this article Font size -16+
An AirAsia plane that crashed into the Java Sea last month with 162 people on board climbed at a faster than normal speed and then stalled, the Indonesian transport minister said.
Flight QZ8501 went down on December 28 in stormy weather, during what was supposed to be a short trip from the Indonesian city of Surabaya to Singapore.
Indonesia's meteorological agency has said bad weather may have caused the crash, and investigators are analysing the data from the jet's black boxes before releasing a preliminary report.
Tatang Kurniadi, chairman of the National Transportation Safety Committee, said on Wednesday Indonesia will not release to the public a 30-day preliminary report detailing its investigation the crash.
The report is expected to be submitted to the International Civil Aviation Organization (ICAO) next week. Under ICAO regulations, the preliminary report must be filed within 30 days from the date of the accident.
Just moments before the plane disappeared off the radar, the pilot had asked to climb to avoid the storm. He was not immediately granted permission due to heavy air traffic.
"In the final minutes, the plane climbed at a speed which was beyond normal," Transport Minister Ignasius Jonan told reporters on Tuesday, citing radar data.
"The plane suddenly went up at a speed above the normal limit that it was able to climb to. Then it stalled."
Earlier at a parliamentary hearing, he said radar data showed the Airbus A320-200 appeared at one point to be climbing at a rate of 1,800 metres a minute before the crash.
There were several other planes in the area at the time.
"I think it is rare even for a fighter jet to be able to climb 6,000 feet per minute," he said. "For a commercial flight, climbing around 1,000 to 2,000 (feet) is maybe already considered extraordinary, because it is not meant to climb that fast."
His comments came after Indonesian investigators said they were focusing on the possibility of human error or problems with the plane having caused the crash, following an initial analysis of the cockpit voice recorder.
"We didn't hear any other person, no explosion," investigator Nurcahyo Utomo told reporters, explaining why terrorism had been ruled out.
Investigators from the National Transportation Safety Committee were now looking at the "possibility of plane damage and human factors", he said, without giving further details.
As well as the cockpit voice recorder, the committee is also examining a wealth of information in the flight data recorder, which monitors every major part of the plane. A preliminary report will be releasd on January 28.
There was a huge international hunt for the crashed plane, involving ships from several countries including the US and China. Indonesian search and rescue teams have so far recovered just 53 bodies from the sea.
(Agencies)
Tags assigned to this article:
news 7 airlines singapore airasia indonesia malaysia airasia indonesia flight qz8501 international civil aviation organization