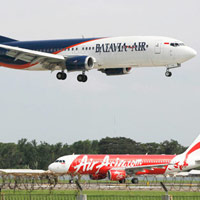 08 November, 2014
Print this article Font size -16+
AirAsia top brass and Ratan Tata, their advisor,on 2 July' 2013 met several ministers here in an effort to speed up clearances for their proposed low-cost airline venture, saying they aimed to launch it by October.
Besides Tata, who is the Advisor to AirAsia India, AirAsia Group chief Tony Fernandes and AirAsia India's newly appointed CEO Mittu Chandilya held separate meetings with Finance Minister P Chidambaram, Home Minister Sushilkumar Shinde, Civil Aviation Minister Ajit Singh and Commerce and Industry Minister Anand Sharma through the day.
The series of meetings came over three months after AirAsia got the FIPB nod to establish the joint venture for the proposed airline. The company is a 49:30:21 joint venture partnership between Malaysian carrier AirAsia, the Tata Group and Arun Bhatia of Telestra TradePlace.
As per procedures, the joint venture has applied for a No-Objection Certificate (NOC) from Civil Aviation Ministry and submitted documents, including names of the new airline's Board, its CEO and other top officers, which were now being scrutinised for security clearance by the Home Ministry.
"They came here for security clearance for Air Asia. We will examine (their application) and take a call as soon as possible," Shinde told reporters after his meeting.
Fernandes briefed all the ministers about the new appointments and other developments in the proposed airline, with the Civil Aviation Minister saying that his ministry would give NOC as soon as the Home Ministry clears the names.
"They are working on that. When they get security clearance, they will apply to the DGCA (for flying permit). I don't expect that it will take too long," Ajit Singh said.
Exuding confidence that Civil Aviation Ministry's NOC "isn't far away", the AirAsia chief said, "Once we get that, the Scheduled Operator's Permit (flying licence) application moves fairly forward and we have to just submit it. I keep repeating that in October I hope that would be the time we would like to start."