After months of denial, China accepts its 4 soldiers were killed in Galwan Valley clash

After months of denial, China accepts its 4 soldiers were killed in Galwan Valley clash

New Delhi [India], February 19 (ANI): After months of denial over casualties in border confrontation with India, China has for the first time on Friday revealed the names and details of its four soldiers killed in the Galwan Valley in June 2020, reported Global Times.
The revelation was shared on the Twitter handle of Global Times.
"China on Friday unveiled, for the first time, names and detailed stories of four martyrs who sacrificed their lives in the border confrontation with India in the Galwan Valley in June 2020, to commemorate their sacrifice for defending national sovereignty and territory," tweeted Global Times.
People's Daily, China too had shared the information about four Chinese soldiers killed in border conflict were awarded honorary titles and first-class merit citations.
Central Military Commission of China also informed that a soldier of the rank of colonel, who led at Galwan Valley was seriously injured and was conferred with an honorary title on Friday.
"Four Chinese soldiers, who were sacrificed in last June's border conflict, were posthumously awarded honorary titles and first-class merit citations, Central Military Commission announced Friday. A colonel, who led them and seriously injured, was conferred with honorary title," tweeted People's Daily, China. 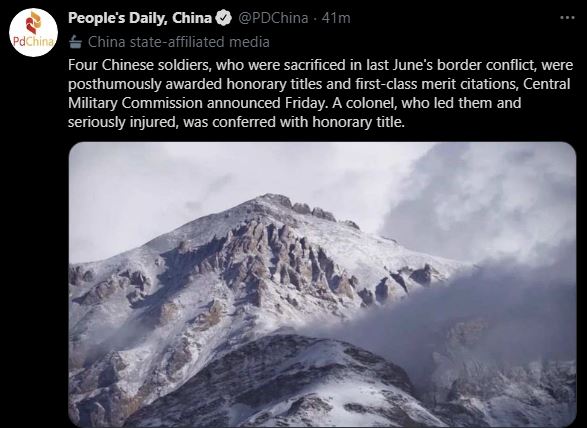 20 Indian soldiers had laid their lives and unspecified numbers of Chinese soldiers were killed in the Galwan Valley in June last year.
Earlier in February, Russian news agency TASS had claimed that 45 Chinese soldiers were killed in the clashes at the Galwan Valley.
India and China are in a standoff in eastern Ladakh along the Line of Actual Control (LAC), following aggressive border skirmishes by the Chinese army.
Meanwhile, Defence Minister Rajnath Singh on Thursday informed the Rajya Sabha that in a major development, India and China had reached an agreement to disengage their troops from the northern and southern banks of the contentious Pangong lake where the Chinese troops would move back to the east of the Finger 8 while the Indian side would go to its Dhan Singh Thapa post near Finger 3. (ANI)