New Delhi [India], December 3 (ANI): Abiding by all the health guidelines amid COVID-19, actor Aditya Roy Kapur and the whole team has commenced the shoot for the action entertainer film 'Om: The Battle Within'.
On Thursday, the 'Malang' actor shared the information on Instagram, saying, "And the journey begins!! OM, my next film with @sanjanasanghi96. Produced by @zeestudiosofficial, @khan_ahmedasas and @shairaahmedkhan and directed by @itskapilverma!" 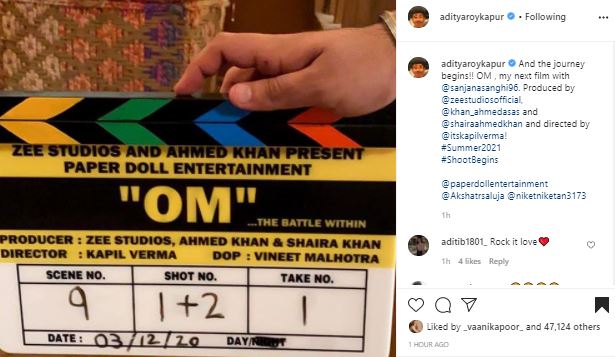 The 35-year-old actor, who has gained a lot of appreciation for his role in Anurag Basu's Ludo, is all set to get back to the set with his upcoming action entertainer project.
Actor Sanjana Sanghi who is paired opposite Aditya also shared the news on her Instagram. In the post, she shared a picture of the whole cast with a caption, "Our beautiful journey begins!! DAY 1 with the best @adityaroykapur."

Adding to the caption, she showed her excitement for the new project, "Most stoked for my next action-thriller 'OM: The Battle Within'."
Filmmaker Ahmed Khan announced the news of the "Aashiqui 2" actor to be cast in the new film on the latter's 35th birthday which is scheduled to be directed by Kapil Verma and co-produced by Khan, his wife Shaira Khan and Zee Studios.
'Om: The Battle Within' will mark the directorial debut of action director Tinu Verma's son Kapil. (ANI)