Created and produced by Abundantia Entertainment, the web series has actors including Amit Sadh, Nithya Menen and Saiyami Kher in significant roles. The 'Bunty Aur Babli' actor shared the information on Twitter, revealing an intriguing poster of his upcoming series. 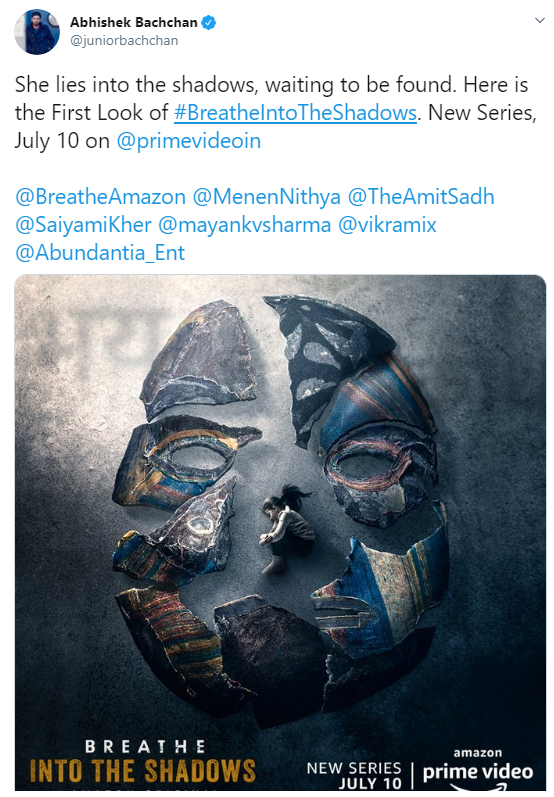 "She lies into the shadows, waiting to be found. Here is the First Look of #BreatheIntoTheShadows. New Series, July 10 on @primevideoin," Bachchan tweeted.

In the poster, a little girl can be seen lying on the floor in between a huge broken mask.

Created and produced by Abundantia Entertainment, the web series has actors including Amit Sadh, Nithya Menen and Saiyami Kher in significant roles.

Moreover, Bachchan is all set to complete 20 years in the Bollywood industry by the end of this month.

The 44-year-old actor began his career with JP Dutta's 'Refugee.' Since then he has acted in several hit films including 'Dhoom,' 'Dostana,' 'Delhi-6,' 'Guru,' and 'Yuva.'

Some of his upcoming films include, 'Big Bull,' 'Bob Biswas,' and 'Ludo.'

Tags assigned to this article:
Abhishek Bachchan web series Breathe Into The Shadows