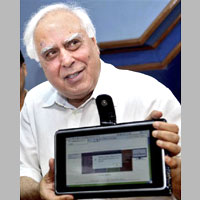 08 November, 2014
Print this article Font size -16+
The fate of the much touted low-cost computing device Aakash looks uncertain with the government on Friday, 22 March 2013, conceding that there has been a "failure" in its production.

Concerned over the tardy progress, the HRD Ministry has written to IIT Bombay (the executing body) to ensure the vendor (Datawind) meets the terms and conditions and the supply order by March 31 in letter and spirit, failing which action could be initiated against it.

The ministry is also awaiting a report from a committee headed by Rajendra Pawar before taking a call about the prospects of the device on which many students had pinned their hope.

"... the other challenge is productionising it. That is where the failure has come. If the productionisation had happened on time, students would have accessed to it. The product exists but we are not able to productionise it as much as required," HRD Minister M M Pallam Raju told reporters here.

The tablet was promised to be made available to students at a subsidised rate of Rs 1130. Datawind was asked to supply one lakh pieces initially, which never happened.

Raju, though, maintained that the project has created an environment for similar other devices in the market which a students as well can go for instead of being too "obsessed" with the device.

"Aakash is a tablet which will enable you to access the content. But there are others who have come up...students will pick up whatever serves the purpose better and affordable. We will continue to work on the product as long as development of the product is concerned," he said, when asked if the tablet should be opened to market force which can determine which product can survive in the rather than focussing on it solely.

He hoped in due course, other vendors could also chip developing the device.

Raju said the ultimate aim should be to enable a student to access content at an affordable price through enabling environment and exploiting the 'National Mission on Education using ICT' platform.

The project, a brain child of the then HRD Minister Kapil Sibal, was launched amid much fanfare in October, 2011, drawing adulations from domestic and international market. It was also hailed by UN with the secretary general Ban Ki-moon unveiling there last November.

The government also prepared a cabinet note for procuring 50 lakh such pieces with enhanced specifications, amid indications that it would be placed soon.

When asked about it, Higher Education Secretary Ashok Thakur said they would take a call on it only after receiving the report of the Rajendra Pawar Committee which evaluated the feasibility of the technology used for Aakash tablet.

"The day he is going to submit his report, based on that we will take further action on whether to proceed with the Cabinet note or to concentrate and look at the immediate thing that is connectivity," he said.

A separate committee headed Goverdhan Mehta is also understood to have examined the feasibility of the device under the 'The National Mission on Education using ICT'.

"The idea was that once we have supply of one lakh tablets, we would be able to proceed further...there has been a setback, it seems that have not been able to supply, so therefore," Thakur said expressing his regret at the lack of progress.

He said Datawind has been set a target of March 31 to comply with its supply orders, failing which "action will be taken against the company".

"The company could not supply us on time, so we had to extend the date to March 31. We have written to IIT Bombay to ensure that the term and conditions and the supply order should be implemented in letter and spirit.

So on March 31, we will come to know how much they have supplied but the information we got sometime back was that there was lot of gap. So in concern, we wrote to IIT Bombay to ensure that full supply are received," he said.