A Sum Of All Parts 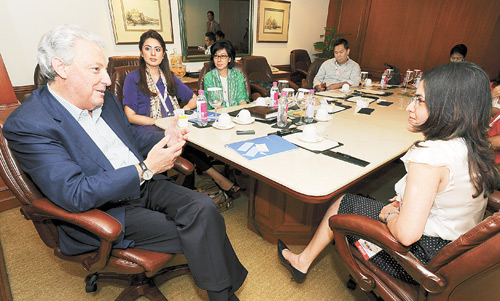 The Internet is always the flavour. Last year, a certain social network, Renren.com, was very popular. This year it is Weibo, a cross between Facebook and Twitter. It has 500 million registered users, very popular. A lot of brands are still trying to figure out how to use it. My worry is that by the time we figure that out, the next thing will come along, maybe in mobile.

RB: For the next 3-4 years, television will continue to be the lead medium in India. Even after that, video will be the lead message platform — irrespective of television or the Internet. The strategies to make people watch your video or contribute to it or engage with it are going to differ with the medium.

KL: In terms of creativity, the stages of evolution of the advertising business in China are a lot different from India. In China, advertising is very culturally rich. You cannot transport something from the West.

RB: The beauty of India and China is that there are very bright creative people who understand the world besides their own. This is unlike the rest of the world where creative people under-stand their own part of the world but not other parts. What we take for granted in India can be seen as really rude in China. For instance, if I dirty someone's clothes in China and say, "There's Surf Excel. What's the problem?", it would be rude. But if I dirty someone's clothes and the person himself says, "There's Surf Excel, don't worry", it is okay. Things like these can change the whole dynamics. These two cultures are so different from the West, and from each other. It is a fascinating journey.

break-page-break
An Illusion Of Numbers
Anna Bernasek, US-based author of the Economics of Integrity, and Swami Sukhabodhananda, founder-chairman of Prasanna Trust, discuss the need to revalue our assessment of the market economy, sustainable marketing and messages.

Anna Bernasek: You talk about finding the goodness in oneself — that is how one will create not just financial wealth but also spiritual wealth. The same can be done in a market economy.
Swami Sukhabodhananda: The way I see it, the world at large is focused on just creating wealth, (but) not knowing why they are creating wealth. I see an error here. They want to create wealth because they want to be better than somebody else. Second, I find a spiritual error. It is all about numbers — if I am No. 2, how to get to No. 1. It is an illusion of numbers, so the very context of creating wealth is missing. If wealth decides who I am, I am a victim of wealth. So the way I see it, you can create wealth if you are richer than wealth.

AB: Does this illusion of wealth come from a market economy, or from human nature?
SS: It comes from mass hypnosis, which we have not questioned. There is a genetically inherited error and an un-inspected lie that has been controlling our lives, one that believes that consumption makes you happy, or another that pleasure equals joy. Having said that, pleasure has its place. You cannot denounce it, but you do not make a distinction between pleasure and joy, and then you get confused, so you only seek pleasure.

AB: Isn't that because we do not really understand what we value? I see businesses facilitating these wonderful lives that we lead. But we are hypnotised by messages from mediums such as television, marketing, etc.
SS: When I was growing up, there was a cigarette advertisement that showed a rich man sporting a Rolex watch, smoking with others who were looking at him.

You are confusing people. You are giving the message that if you smoke, you are rich, and pretty girls will look at you. Your idea of success is messed up with the image of smoking. The value (of smoking) is not digested but dumped through the brilliance of media.

AB: Advertisers and marketers are starting to think if what they are doing is sustainable. There is probably a reawakening, a movement at hand. Do you feel optimistic about this?
SS: They are moving, yes. But is this sufficient? We need to have a healthy doubt, so there is urgency to this issue. Right now, the whole drive is to achieve while balancing.

AB: What can we do as businesses?
SS: We have to address the basic errors of life. Life is a platform where we go on achieving things. The focus globally has been on the achievements in one's life. But we delete the very basis of this life. We are all caught up in ‘becoming'. So I humourously say, "even if you win the rat race, you will still be a rat".

AB: Is that balance really achievable in a market economy?
SS: It is easily achievable. But there is lack of vision, or too much hurriedness or lack of consistency in reaching your vision. One should be inspired to move towards that vision. And if you do not make this big error, that my success is dependent on someone else's failure, you can achieve it much better.