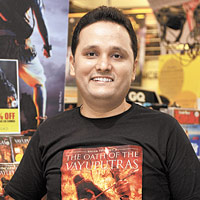 08 November, 2014
Print this article Font size -16+
Last month, myth-lit sensation Amish Tripathi hogged the headlines for the $1 million (Rs 5 crore) advance he received from Chennai-based publisher Westland. The offer follows the amazing success of 38-year-old Tripathi’s Shiva Trilogy, which sold more than 1.3 million copies across three volumes. One of the most popular authors in India today, Tripathi, however, had a shaky start as a writer. Dozens of publishers rejected his work. “I stopped counting at 20 rejections,” quipped Tripathi in a recent interview. But he “believed” in his story and decided to self-publish The Immortals of Meluha, the first book in the series. In months, it became a success; some reports say it sold 40,000 copies before Westland spotted its potential. Rashmi Bansal, another popular author in the Westland camp now, started with non-traditional publishers. Recent sensation, Fifty Shades of Grey, by British author E.L. James too had a ‘self’ start of sorts. It began as fan fiction on a popular website. Seeing its popularity, James put it up on her website. Later, she released it as an e-book, followed by a print-on-demand paperback from a boutique publisher in Australia. The rest is history that sounds like fiction. The erotica became a sensation across the globe and set records in ‘viral marketing’. It was picked up by Random House’s Vintage imprint in 2011. So far, the trilogy has sold more than 65 million copies worldwide — outselling even the Harry Potter series.
The success of these authors points to the immense potential of self-publishing. Unlike in the past, where writers had to face many hurdles to self-publish a work, today advances in technology and the pen­e­tration of the Web has made production and distribution of creative work a cakewalk. “To create an e-book, you just need to convert your manuscript into the format required by each platform,” says Rasana Atreya, a Hyderabad-based self-published author.
Atreya’s writing career is starkly different from other self-published authors. In early 2012, the manuscript of her novel Tell a Thousand Lies was shortlisted for the coveted 2012 Tibor Jones South Asia Prize. Soon, she got an offer from a leading publisher in India. But Atreya did something that could only happen in fiction: she declined the offer and decided to go it on her own. She enrolled the book with publishing giant Amazon’s Kindle Direct Publishing, a platform where authors can upload their books and market them. Soon, her novel went on to become a bestseller on Amazon. “I declined the publishing contract mainly for the experience of doing it on my own, and it is the best thing I ever did,” says Atreya. “I get fan mail from around the world. What could be more gratifying for a writer?” beams Atreya.

Point taken. But what’s the whole business about? Self-publishing is a fairly old concept. “The oft-quoted example is that of Danish author Hans Christian Andersen (famous for his fairy tales) who had to pay to get his first stories published,” says Vivek Mehra, managing director of Sage Publishing and a keen observer of this emerging trend. In fact, some of the biggest writers in the past and present, such as Mark Twain, John Grisham and Marcel Proust, self-published many of their key works.
In conventional publishing, a publisher pays an author for his work; the firm also takes care of sales. But in self-publishing, the author calls the shots. She chooses the publisher, pays it, fixes the price, finds sales channels, and earns from sales directly.
In the physical world, this is a tiresome task. But in the digital universe, it’s simply ‘click to publish’.
It works like this: the writer prepares the manuscript, gets it edited, converts the word document into an e-format (.mobi, .epub, .djvu, .pdf, etc.) and uploads the book onto a suitable platform. There are several tools available online to do this.
But not everyone takes the e-book route. There is a clutch of authors which prefers to go the dead-tree way. P.V. Jayaraj, a college teacher from Kannur in Kerala, is one. His self-published debut novel, Monsoons In Malabar, came out in the physical form, in collaboration with a local publisher. But Jayaraj now wants to try the online route for the freedom it offers in marketing and distribution.
Online or offline, these authors insist on the freedom self-publishing offers.
In self-publishing, all the services such as editing, production, design, sales and marketing have to be paid for. “It is not like when you a sign a contract with a publisher and all these services get taken care of. Instead, the author is given an adv­ance against royalties,” explains Jaya Bhattacharji Rose, a publishing consultant. Self-publishing, she says, has a year-on-year growth rate of 100 per cent in India. Since the author owns the content and the copyright, monetisation can happen in many ways — placing the content on websites, creating an online buzz using social media, using the co­n­tent in apps, etc., are the ways forward in the self-publishing business. “It’s where authors who are savvy can capitalise on demand,” says Rose.
That said, many self-published works vanish without a trace as their authors lack the ability to ensure ‘placement’, which is an advantage that mainstream publishers enjoy.
The Business
To the purists, what’s taken today by many to be self-publishing is not what it actually is. “Self-publishing is when you, the author, create an account with Amazon, Smashwords, etc., upload your e-book, set the price and click to ‘publish’,” says Atreya. “When someone else does this for you, that’s not self-publishing.” Atreya says it is unfortunate that many companies are using the term for all the wrong reasons. “These companies are the new vanity publishers who bill you for a lot more than what self-publishing actually costs.”
But not many buy this logic. “Self-publishing is a lucrative business publishing companies can make money from,” says a top executive of a Delhi-based publishing firm. There are no readily available estimates for India, but in the US, according to data from book research firm Bowker, the number of self-published books has grown about 290 per cent since 2006, with about 240,000 print and e-titles released in 2011. In the UK, a report says self-published books accounted for nearly 11 per cent of all e-books bought in the first half of 2012.
That’s big growth. And a fast-emerging market for sure. Several publishers are already trying to cash in on this trend. In July 2012, Penguin bought self-publishing platform Author Solutions from Bertram Capital, a US-based private equity firm, for $116 million. The move came about a year after Penguin launched its own self-publishing platform, Book Country. In 2011, Author Solutions saw revenues of $100 million. So far, it has helped 170,000 authors who have gone on to publish 200,000 books.
Penguin did not stop there. In India, it went on to launch a self-publishing service called Partridge, in February 2013, in partnership with Author Solutions. The services it offers to authors include editing, design and illustration, e-book formatting and distribution on all e-readers and publicity. The service is similar to rival Simon & Schuster’s Archway Publishing, which is outsourced to, yes, Author Solutions itself. The fees charged from authors depend on the services they opt for. Roughly, these range between Rs 12,000 and Rs 1,50,000.
Despite these impressive numbers, self-publishing has been a fiction phenomenon so far. “It is a term less used in academic publishing,” says Sage’s Mehra. “In academic publishing, open access is more frequently used. Here, the author pays for getting published, but the content is freely available online. Going forward, more trade publishers will follow this route.”
Further, there are people in the publishing industry who think self-publishing does not necessarily mean quality literature. “The self-published books may not sell or win quality awards,” says a publishing consultant. “It is just glorified blogging.”
That brings one to the oft-cited bane of self-publishing — poor quality content. Most writers are averse to hiring professional editors and hence end up with shoddy products. It’s here that platforms like Partridge or Archway come in. There are also several e-groups that connect new writers with publishing professionals. The Web is full of how-to guides on self-publishing; the most famous example of which is an e-book,  APE: Author, Publisher, Entrepreneur, prepared by popular authors and IT gurus Guy Kawasaki and Shawn Welch. And the title of the book merrily sums up the self-publishing story of the day: it’s all about creating literary entrepreneurs, rather than just writers.
jinoy (dot)bw(at)gmail(dot)com
Twitter:@jinoyjosep
(This story was published in BW | Businessworld Issue Dated 06-05-2013)
Tags assigned to this article:
magazine sage publications jinoy jose p publishing jaya bhattacharji rose amazon westland amish tripathi bwbooks7list self publishing magazine 6 magazine 2013 rasana atreya smashwords rashmi bnasal