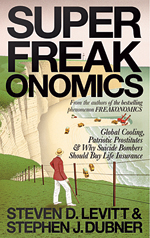 They call it a frequel, and somehow, that seems an apt description. Superfreakonomics, the successor to Freakanomics, one of the biggest bestsellers in recent times, is replete with the same freakiness: great storytelling and interesting examples, laced with a dash of sometimes wicked humour.

The pace of the narrative is racy, and for those who shy away from books on the dismal science, very accessible. It makes economics, a social science, feel like a sociable science. Even the introduction begins with a story, based on a National Bureau of Economic Research (a US think tank) paper that examined how women in rural India got more assertive and became decision-makers in family issues such as educating the girl child, after watching cable television programming for several months. The other stories used to make the authors' points are as subtly titled as in the previous version. Consider, for instance, ‘Why Terrorists Should Buy Life Insurance'. The story makes the broader point that contrary to popular perception, most terrorists do not come from the poorer social strata (just about 16 per cent do), but from well-off families.

After their first book was published, the authors, Steven Levitt and Steven Dubner, set up a website, www.freakanomics.com, but somehow, the results were a little disappointing. Many other economists would point out it is a matter of which data you look at. Shift a couple, and the results could be different. So, the authors invite you to disagree with them, a conversation most of us would enjoy.