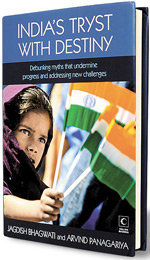 08 November, 2014
Print this article Font size -16+
There are several ways to slice post-1991 reforms. This is one. “Track 1: Reforms aimed at accelerating and sustaining growth while making it even more inclusive. Track 2: Reforms to make redistributive programmes more effective as their scope widens.” Yet another way is to slice them in terms of a difference between product markets and factor markets (land and other natural resources, labour, environment), with most factor markets being state subjects. India’s Tryst With Destiny by Jagdish Bhagwati and Arvind Panagariya is more of a popular work compared to Pangariya’s more scholarly India: The Emerging Giant (2008).

Less scholarly does not mean it lacks academic rigour. It is more about the style. The book has 17 chapters in three parts. Part 2 is on the unfinished agenda of Track 1 reforms, and highlights labour laws, land acquisition, infrastructure and higher education. Part 3 is on reforming public expenditure. There are some broader issues, though, such as roles of the Planning Commission and the Finance Commission, Union-State relations, discretionary transfers through the Central sector, decentralisation, revamping of the Seventh Schedule and civil service reform. However defined, governance is not just about economic policy, but about implementation too.

Part 1 is about debunking myths. Some of the myths empirically addressed are as follows: Indian planners (earlier) pursued growth as an end in itself, ignoring poverty reduction and other social objectives. Health and education were only recently thought of as objectives. Since poverty did not fall through the 1970s, the growth strategy adopted was inappropriate. By itself, growth makes the rich richer and the poor, poorer. To reduce poverty, redistribution is necessary. Reforms do not explain the faster growth in India since 1991. There has been no reduction in poverty as a result of post-1991 reforms.

Of the 285 pages in this book (252 if you exclude appendices), 116 are on debunking of such myths. Since these myths continue to float around, this is the major contribution. That’s the reason it should be read by not only those who formulate economic policy (regardless of what data show), but also by political classes and everyone else who shapes public opinion and contributes to discourse.

My discomfort is with what is presumed to be happening under Part 3. Sample this: “Prime Minister Singh has seized the initiative from the Congress party leadership to reclaim his legacy as a reformer, and announced a series of liberalising steps… As the book goes to press, the PM has even announced his decision to introduce cash subsidies... The reforms had come to a standstill as far back as May 2004 when the United Progress (sic) Alliance first came to power. But the decline in the growth rate is quite recent.”

I wish I could be so optimistic. First, I think a swing back towards socialism was started in 2004, accentuated in 2009. Second, there has not been any switch towards reforms or addressing public spends. No subsidy reform is yet contemplated. Third, other than a malign external environment, growth suffered (savings and investments fell), when public expenditure shot up (not in 2004, but around 2008-09). I continue to wonder whether ‘Congress’ rhymes better with ‘Progress’ or ‘Regress’.