Railway Minister Suresh Prabhakar Prabhu has a reputation for being a no-nonsense person. And his maiden railway budget on February 26 has lived up to that. 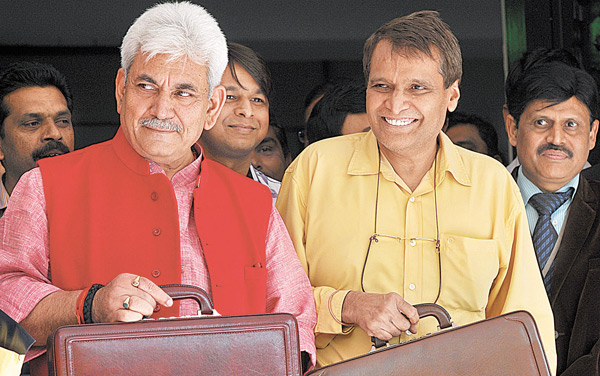 07 April, 2015
Print this article Font size -16+
Railway Minister Suresh Prabhakar Prabhu has a reputation for being a no-nonsense person. And his maiden railway budget on February 26 has lived up to that.
For the first time in recent memory, it was a budget that did not talk about passenger fares or new trains. It did recommend a freight hike, but the tenor of the 2015-16 budget proposals for the railways was not populist or political. It was serious business.
It had a focus, the plans were time-bound, and there was a vision. The refrain being improved overall passenger experience, enhanced safety, and additional investments for the Indian railways over the next five years.
The budget also intrinsically weaves rail development into several of Prime Minister Narendra Modi’s pet missions, including Make in India, Swachh Bharat and Digital India.

The Plan
In 2015-16, the ministry plans to take up 77 projects to upgrade rail infrastructure covering 9,400 km across states at a cost of Rs 96,182 crore.  This includes railway electrification plans for 6,608 route kilometres.
The budget proposes 970 safety related works to eliminate 3,438 level crossings at a total expense of
Rs 6,581 crore during 2015-16. The government also wants to increase the track length by 20 per cent from 1,14,000 km to 1,38,000 km, and grow its annual freight carrying capacity from 1 billion tonnes to 1.5 billion tonnes. Plans to increase the speed of nine railway corridors from the existing 110-130 kmph to 160-200 kmph respectively, to make Delhi-Kolkata and Delhi-Mumbai journeys 12-hour trips are also being chalked out.
More crucial from an economic point of view is the decision to increase the average speed of freight trains. A policy of attaining speeds of 100 kmph for empty freight trains and 75 kmph for loaded trains is being put in place.

Investments
The key to success of these proposals is the plan to invest Rs 8.5 lakh crore in overhauling the Indian railways in the next five years. Going by the plan outlay for 2015-16, one eighth of this (Rs 1,00,011 crore), itself a record of sort, should happen during the current financial year itself. The significance of the budgetary outlay is not just its size — it is 52 per cent higher than the previous year’s plan size — but the confidence Prabhu has in generating necessary funds for the purpose.
The most visible effort to increase revenue — though it can only fetch a fraction of what is needed — was the upward revision in freight rates. The government expects goods earnings to touch Rs 1,21,423 crore for 2015-16, a 13.6 per cent increase over the previous year.
“Amongst commodities witnessing a significant freight revision are grains, pulses and urea with 10 per cent hike and coal with 6.3 per cent. Increase in freight rates in the range of 2-10 per cent are commodities like cement, coal, iron or steel, bitumen, and urea is neutral to negative for the respective sectors,” Angel Broking states.
Of the budget outlay, Rs 40,000 crore will come from the central government, Rs 1,645.6 crore from railways’ share in diesel cess, Rs 1,770 crore from market borrowings, and the remaining from internal accruals. According to consultancy India Ratings and Research, “except internal accruals, other options look plausible”. Incidentally, the sharp decline in crude prices has had a positive impact on the operating performance of the railways.
Prabhu also suggested joint ventures with states for project development, resource mobilisation, land acquisition, project implementation and monitoring critical rail projects. JVs with major public sector companies to develop new lines were also proposed.
The intent behind the budget proposal thus merits full credit. But noble intentions have been the hall mark of almost every grandiose plan, proposal and mission unveiled by the Modi government ever since it took charge. There was nothing bad about skilling India. Neither was the massive renewable energy development plans or financial inclusion mission wrong. It’s just that in all these cases, implementation is all that matters.
If Prabhu’s plans fructify, the Indian railways will undergo a transformation beyond recognition. The resolve to spearhead the change through public spending, with all possible support from the private sector, should only help.
(This story was published in BW | Businessworld Issue Dated 23-03-2015)
Tags assigned to this article:
magazine transport indian railways joe c mathew issue9list rail budget suresh prabhu magazine 23 march 2015