A Quiver Full Of Strategy 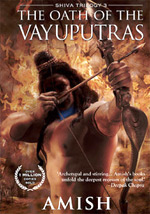 08 November, 2014
Print this article Font size -16+
You know it, for sure. Indian publishing is seeing a boom now. The industry sells more books now, and there are more bestsellers in the market. So you must excuse them if they go slightly overboard. Well, that explains the odd hours that big-ticket myth-seller Amish Tripathi has chosen to release the third of his Shiva Trilogy, The Oath of the Vayuputras. The book was launched at 22.05 hours at the Crossword Bookstore, Kemps Corner, in Mumbai on 26 February. The publishers claim it will certainly be the first for an Indian book. The release is set to create a record of sorts. An initial print run of 500,000 copies and a Harry Potter kind of midnight launch makes Tripathi the most coveted author in town. "The total budget for the 'midnight' launch including the music video is in the region of Rs 60-70 lakhs", says Westland CEO Gautam Padmanabhan.

Tripathi is not the only one that’s bitten by the novelty bug. For the launch of his latest book The City Of Devi (Bloomsbury India), US-based mathematician Manil Suri gave a 45-minute power point lecture on (hold you breathe!) 'The Mathematics Of Fiction'. Biz-lit writer Rashmi Bansal took a bunch of bloggers to tour Mumbai's Dharavi area last August to meet the entrepreneurs mentioned in her book Poor Little Rich Slum (Westland), while Madhuri Banerjee's Mistakes Like Love And Sex (Metro Reads, Penguin) was unveiled at a radio station in Kolkata end of last year. "The midnight release works best for the book as it is the final part of a trilogy and hence there is a lot of pent up demand from fans of the first two books, says Padmanabhan.

"The concept (midnight release) works best for a book like The Oath Of The Vayuputras as it is the final part of a trilogy and hence there is a lot of pent up demand from fans of the first two books," says Padmanabhan. "So I don’t believe this will start a trend as it would only work selectively," he adds.

Penguin's recent bestselling author Prajwal Parajuly swears by the power of book launches. "We are lucky that in India, publishers invest their resources for launches, says Parajuly. His book The Gurkha's Daughter is a set of short stories set in the North East. Parajuly, who has a two-book deal with Quercus has had launches in Delhi, Gangtok, Shimla, Kathmandu, Goa, Bombay and Bangalore and events in London and Oxford.

But not many agree. Streamers and celebrities apart, there is nothing extraordinary happening in book launches in India, says Jaya Bhattacharji Rose, a Delhi-based publishing consultant. "Venues may be changing. Timings may change. But the story board remains the same," says Rose, who has worked with Taylor & Francis and Zubaan. "Book promotions/events and conversations are being used as platform to engage readers, make authors accessible, sell books and more importantly are crucial on the events calendar of a bookstore. it helps in keeping the bookstore alive," she adds.

Vinutha Mallya, a publishing consultant based in Bangalore says that marketing a book has become that much more challenging since a book competes with other items such as toys and lifestyle goods. "However, most efforts at marketing and promotions are becoming imitative of the West, with slight tweaks to suit Indian conditions," adds Mallya. "Even so, we are yet to see effective use of social media for book promotions in India. Only a handful of publishers have dedicated staff to manage promotions, even less that have someone to work on social-media promotions."

Publishers don't prefer to link launches and tangible results in sales. "The idea is to create a tamasha," says Kapish Mehra of Delhi-based Rupa Publications, that has authors such as Chetan Bhagat, in its kitty, in addition to being the parent concern of Aleph Book Company and Red Turtle, a young adults publishing imprint.

Not all books find 'launch pads' for their books. Take for instance, Amandeep Sandhu's Roll Of Honour (Rupa Publications) on Operation Bluestar and its after math, had an informal book launch in Delhi at IIC. "It was purely a Facebook event prompted by people asking to meet. It was not a formal book launch with a chief guest unveiling the book etc. It went very very well," says the Delhi-based writer. "The key point is touching the audience's heart, that can not be manufactured but can only come if one is honest with the text and the audience," adds Sandhu

India is surely generating a buzz in publishing world, through launches and new bestselling authors. However, in the West, launches are slowly going out of trend. Book releases and promotional activities around the release are taking precedence over 'launch' itself. Alison Baverstock, Course Leader, MA Publishing, Kingston University says, "Book launches were the traditional means of attracting press interest to new books, and thus generating coverage which would prompt demand." Baverstock who has also authored How To Market Books (Kogan Page) adds, "The intermediaries for books are changing, so it's important for publishers to think about who could influence the sales trajectory of a book -- via Twitter, their blogs, and other social media. A book launch won't necessarily do all this."

In sum, it comes down to the old adage: never judge the book by its cover, or launch rather.