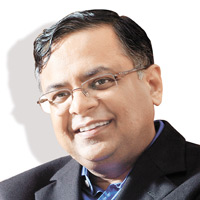 However, the company with 226,000 employees is trying hard to delink revenue growth from headcount growth. Ajoy Mukherjee, TCS's human resources head, has repeatedly asserted that non-linear revenue growth would become visible by the end of the current financial year. With Europe — from where it gets a quarter of its revenues — still facing challenging times, the company will have to find newer avenues of growth if it has to sustain and expand on the lead it has built over other Indian IT players and catch up with the global biggies.

A senior vice-president of a large Indian IT company who did not want to be identified as he is not authorised to speak on competitors, says: "They have done an amazing job of execution and are extremely competitive in the marketplace. However, it remains to be seen whether TCS can move up the value chain and take on the likes of IBM and Accenture in large consulting- led transformation deals. But that is a challenge every large Indian IT company will face."

Chandrasekaran would be hoping to continue to build on the current strengths to take TCS to the next level.