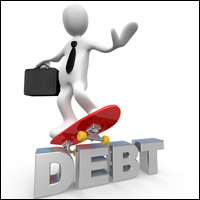 08 November, 2014
Print this article Font size -16+
In a growing sign of companies facing difficulties in meeting their financial obligations, banks were approached for debt restructuring in a record 126 cases during 2012 for a collective amount of Rs 84,000 crore (over $15 billion).

The Businessworld cover story (Click Here: On The Edge) in July 2012 had recognised this growing trend. The most vital statistics often hide more than they reveal. As more firms find it increasingly difficult to service their bank loan obligations, till, end June 2012, the amount of bank loans  under corporate debt restructuring (CDR) was over Rs 2 lakh crore. The number of proposals received by the CDR Cell housed in the Industrial Development Bank of India, the nodal agency tasked with managing the process for the banking system, was 392. Compared to the figure a year ago, that was an increase of over 150 per cent.

The story of how companies got themselves into debt distress has many strands.When the economy slows, raw material and inventory move more slowly, and revenues do not grow fast enough to cover debt service payments. Take the iron and steel firms. Data from the CDR Cells show 31 entities, with a total debt of Rs 39,252 crore, account for over 26 per cent of the total restructuring cases at the end of March 2012. "Iron and steel is a cyclical business," says A.S.V. Krishnan, senior analyst at Ambit Capital in Mumbai. "During boom times, they go ballistic on expansion. Capacity addition leapfrogs suddenly." Which means they take a lot of debt.

Restructuring corporate loans is providing a lifeline to borrowers struggling in a sharp economic slowdown but stressing banks.

During the last quarter ended December 31, 2012 itself, a total number of 25 cases were referred for Corporate Debt Restructuring (CDR) for an aggregate amount of over Rs 20,000 crore, shows the data available with the CDR cell of bankers.

RBI had helped set up CDR system in 2001 to help the corporates facing financial difficulties due to "factors beyond their control and due to certain internal reasons."

Besides helping the corporates manage their huge debts, it also seeks to safeguard the interest of banks and financial institutions through restructuring of certain debt cases.

High interest costs, along with overall sluggishness in domestic and global economies have made it difficult for the companies to meet their debt obligations, which in turn has resulted in a spurt in CDR cases.

At the end of 2012, 50 cases involving Rs 23,000 crore were pending for consideration under CDR mechanism.

During the October-December quarter of 2012, a total 26 CDR requests involving Rs 15,000 crore were rejected.

A total of 491 cases, involving total debt of Rs 2.67 lakh crore, have been referred to CDR cell since its inception. Of this, 362 cases involving about Rs 2.12 lakh crore worth debt have been approved so far, while 79 requests for debt worth about Rs 32,000 crore have been rejected.

In terms of financial year, a total of 99 cases have been referred to CDR cell for an aggregate amount of about Rs 60,000 crore so far in 2012-13. This is a higher number than the referred CDR cases for an entire financial year ever.

In the previous fiscal 2011-12, 87 cases (then a record) with an aggregate debt of about Rs 68,000 crore (over USD 12 billion) were referred for corporate debt restructuring.

The amount of such distressed debt had grown nearly three-fold from Rs 23,000 crore in 2010-11, while the number of cases also grew sharply by 78 per cent.

Experts say that rising number of CDR cases does not augur well for the banking sector, as also for corporates.