A Perennial Stream Of Woes 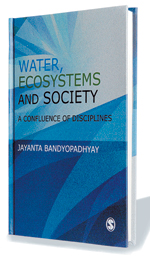 Eco-hydrology is the new paradigm for a holistic understanding of water systems. It combines newer streams of ecological consciousness and a social approach to engineering. In the process, it challenges the western approach to managing resources to meet human needs. Eco-hydrology argues that demand management is more important than supply-side management. Modern water management has focused exclusively on the latter.

Understanding eco-hydrology is not easy, as Jayanta Bandyopadhyay points out in his book. It requires an incisive look at the development of modern water supply systems dictated by engineers. The book places traditional community systems in the context of the recent mega projects and the increasing pre-eminence of groundwater. It strongly argues for a multi-disciplinary approach to managing water systems.

The first hurdle is lack of formal training in eco-hydrology. Also, much of the work in this inter-disciplinary area has been conducted by researchers from various backgrounds such as hydrology, sociology and engineering. Hence, their work is not necessarily well-informed.

The second hurdle is absence of data, especially in India. The paradigm of eco-hydrology is relevant in India due to its extensive and intensive traditional knowledge base of water management and factors such as diversity of culture and geography, unique rainfall pattern, high but uneven per capita water availability. However, many of these areas do not have clear data. For example, we have rainfall data for only the past few decades. That too is not comprehensive. Further, we have no data on glaciers, the main source of water in the Ganga-Brahmaputra-Meghna (GBM) river basin.

The third hurdle is the sectoral approach to water management. Engineers, educated under our westernised system of education, have fixed notions of water management through large storage structures. They have dominated modern water management, says Bandyopadhyay, marginalising other aspects of water supply and use. Recently, the high cost of new water projects prompted the government to shift part of the cost to local people in the name of ‘community ownership'. But the back-end remains biased towards engineering solutions.

The fourth hurdle is the politician-business-bureaucrat nexus behind large water projects. This aspect, however, has not been brought out strongly in the book. Several large projects have their origins in the need for flood control, or increasing the irrigated area, or transferring water from a region with surplus water to one where water is scarce. These projects are promoted less for their original purpose and more for the rich pickings they provide for the nexus. Bandyopadhyay only touches upon this issue. He does not cite examples of corruption in the water sector.

In recent years, the environmental movement has brought out the need to maintain ecosystem services provided by rivers. This is something the engineers had neglected. Another neglected area is the social constructs that help traditional water systems. Large, centralised schemes do not have place for these elements, considering the externalities.

The book cites several examples from developed countries, where water policy is becoming more multi-disciplinary. In Europe, the Water Framework Directive exemplifies an ecosystem perspective, rather than a traditional engineering perspective. However, India's water policy says planning, management and development of water resources need to be governed by national perspective. It does not take into account the expanding inter-disciplinary knowledge on water systems. In other words, eco-hydrology, right to water, property rights and community institutions do not find place in India's approach. This is ironic. India's current approach to water is based on the European perspective, while Europe itself has moved to a more broad-based approach.

The starting point, the book says, is the integration of knowledge from various disciplines of natural and social sciences with engineering. The next step is to induct this knowledge into the development and management of water systems. Bandyopadhyay says this is difficult to do in an institutional culture unwilling to engage with critics. Had it made workable suggestions about how this can be achieved, the book would have had much more impact.

It stresses the need for an inter-disciplinary approach to water management. For those interested in pursuing the topic in-depth, Bandyopadhyay's book is a rich source of information, as it provides plenty of leads for further reading.

Author Details:
Jayanta Bandyopadhyay teaches science, environment and development at IIM Calcutta. He has been a consultant to several international organisations such as UNDP, Unesco and Swiss Development Cooperation. He was a member of the Task Force on Mountain Ecosystems of the Planning Commission of India. Bandyopadhyay has also authored more than 10 books on ecology.