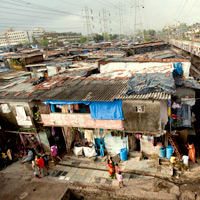 08 November, 2014
Print this article Font size -16+
If you read just one book this spring to understand how the world is changing, it should be Mohsin Hamid's new novel, How to Get Filthy Rich in Rising Asia (Penguin India). The central theme of this funny and vivid work is familiar: the great shift in the global economy's centre of gravity from West to East.

What makes Hamid's tale so revealing is that he gets beneath the human skin of that tectonic lurch. Asia's rise is a story of the eastward tilt of global gross domestic product, but behind those numbers are billions of individual lives that are being radically transformed. In particular, Hamid, who lives in Lahore, Pakistan, focuses on the rapid urbanisation that is both a driver and a consequence of economic growth in the emerging markets.

Hamid reminds us how epic that transition is for the people swept up in it. As he writes in his novel: "You witness a passage of time that outstrips its chronological equivalent. Just as when headed into the mountains a quick shift in altitude can vault one from subtropical jungle to semi-arctic tundra, so too can a few hours on a bus from rural remoteness to urban centrality appear to span millennia."

"There is a massive movement to the cities," Hamid told me by telephone this week from Dublin. His novel chronicles a central result of this migration: the breakdown of the social and economic structures of the village and the frantic individual search to replace them with something else.

"We are seeing a growing understanding that people need to be individual entrepreneurs because the old rural networks won't take care of them anymore," Hamid told me. "In most countries across Asia, the state is still pretty weak; it can't offer you much health care or security in your old age. So people have to fend for themselves."

The result isn't filthy riches for everyone - Hamid described the invisible hand of the "ferocious" market economy as operating "with a carrot, but also a pretty big stick." The individual response to both the peril and the promise is a surge of entrepreneurship.

"People are out there as individual actors in this economy," Hamid said. "They are all little individual businesses. Most people would say, 'I work for me."'

The world's smartest investors have already figured this out. "The whole nature of entrepreneurship has gone global," Bill Ford, chief executive of General Atlantic, a growth equity company that invests heavily in young companies in the emerging markets, told me. "That is a function of capital going global and of people knowing about entrepreneurship globally."

Ford, who describes the founders of the companies in his portfolio with palpable affection and admiration, said one of the distinguishing characteristics of emerging-market entrepreneurs is that they, like Hamid's protagonist, are pioneers.

"In the emerging markets, these are the first-timers," Ford told me. "These are first-generation entrepreneurs. They are people who want to change the world."

Global corporations are surfing this wave, too. The chief executive of Starwood Hotels, Frits van Paasschen, who was born in the Netherlands and is based in the United States, spoke to me this week from Dubai, where he has relocated his executive team for the past five weeks. Van Paasschen, who moved his corporate headquarters to Shanghai in the summer of 2011, told me that 80 percent of the hotels Starwood plans to open in the future are outside Europe, Japan and North America, so that's where his team needs to be, too.

"As urbanisation takes place, hotels are part of that infrastructure," he said. "The growth is just phenomenal."

Elmira Bayrasli, a project leader at the World Policy Institute in New York, is another student of these emerging-market entrepreneurs. She is writing a book whose title says it all: "Steve Jobs Lives in Pakistan."

Like Ford, Bayrasli believes that entrepreneurship has become a global phenomenon. "Entrepreneurship once meant Silicon Valley; it meant America," Bayrasli, the New York-born daughter of Turkish immigrants to the United States, told me. "What I am trying to show is that the greatest dynamism of entrepreneurship now is global. That Steve Jobs's spirit really has gone global. It exists everywhere - in places like Pakistan, Turkey and Nigeria."

The novelist, the scholar and the investor all see this entrepreneurial energy emerging in the space left empty by government, not in a space created by it. "I hope the role of government remains benign neglect," Ford said.

Bayrasli argues that entrepreneurship in poor countries meets needs that we once thought would be satisfied by outside aid. "You have a real pessimism about traditional development and foreign aid," she said. "But there are still a lot of poor people in the world who need help. So now the blue pill is entrepreneurship: Pull yourself up by your bootstraps."

For investors like Ford and corporate leaders like van Paasschen, the rising tide of emerging-market entrepreneurs is already yielding rich returns. Bayrasli thinks they are on the verge of having a direct impact on everyone.

"They are on track to become globally competitive, rivaling the Apples and the Facebooks and the Googles ," Bayrasli said. "They are coming up with innovations that a lot of people here in the United States can benefit from."