A Lot For A Lot 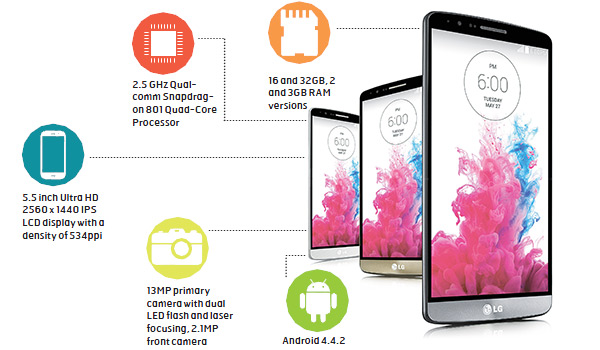 08 November, 2014
Print this article Font size -16+
In a cellphone market that gets tougher and more challenging by the minute, we have a new entrant, the LG G3, which has recently made its way to India. The Other Korean Company has tried to give it everything it's got looks, software, specs, specs, specs. But they¡¦re housed in a nice design.

I call the removable back of this phone plastic-fantastic because it looks like smooth cool metal. The look is a little reminiscent of the HTC One whose design is the subject of great admiration. The G3 is a big phone but good to hold because of the pronounced curve on the back and sloping sides. On the front, the device looks interesting because it has minimal edges, giving all the space to the screen. On the narrow metallic looking strip on the bottom has LG¡¦s logo looking neat and elegant. In fact the device on the whole is quite elegant.

The most talked-about feature of the G3 is the screen. At the moment, only the OPPO Find 7 - featured here earlier ¡X has this screen resolution. There¡¦s a reason for that. Beyond a point, higher and higher resolution is barely detectable and its usefulness is debatable since nothing has been created to leverage it. Thinking back to the screens of the LG G2 and G Flip, I feel those were more than adequate and in fact quite wonderful. Those even had better viewing angles. But the G3's Quad HD display is a big talking point.

Another feature that has people excited is the camera¡¦s laser focusing ability. Other than the flash and camera on the back panel, you will also see a little laser which is meant to home in on an object so the camera can focus sharper and quicker. The camera is quick all right and does a decent job, except where absolute low light comes into the equation, whereupon it¡¦s got the same challenges as all phones except those that particularly do something to work around low-light photography issues. And in this age of selfie mania (seeing as even monkeys take them), the camera software includes a neat trick where you raise your hand, palm facing camera, to tell it you want to take a selfie. Close your hand into a fist and you will activate the timer leading up to your esteemed selfie.

As for the rest of the software on this phone, Android hums along nicely as it's bound to with all that powerful hardware fueling it. And LG's own interface and customisations work smoothly as these are light and invariably lag-free. At the same time, there's all the bag of tricks that one might expect today from a top end phone. You have the Knock feature with which you tap twice to wake up the screen; a series of taps to serve as a code to unlock the device; multi tasking and split screen, an interesting instant quick memo feature and a slide-out health section. There¡¦s also the entire gamut of smart features that let you use voice and gestures for various things. A Google Now-like feature learns your preferences and reminds you of relevant stuff such as things you wanted to buy from a favourite shop when you get there. So all in all, a lot of specs and features, for a lot of money.

Next up: LG is rumored to be coming out with a stylus version of the G3.
(This story was published in BW | Businessworld Issue Dated 22-09-2014)
Tags assigned to this article:
mala bhargava magazine htc one lg g2 oppo find 7 magazine 22 september 2014 lg g3 huawei ascend g750