A Local For Local Approach 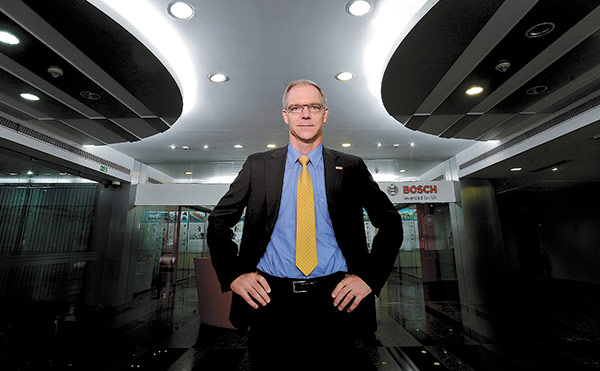 08 November, 2014
Print this article Font size -16+
For the average Indian, Bosch is synonymous with quality spark plugs. However, in the 60-odd years that it has been in India, Bosch has evolved into a prominent tier-I vendor for the domestic automotive industry, with offerings such as a low-cost engine management system for cars, including the Tata Nano, and an anti-lock braking system for motorcycles. But what is drawing attention is its new business-to-customer initiatives — such as the do-it-yourself stores for power tools, its multibrand car and bike service centres and its consumer durable stores under a 50:50 venture with Siemens. In an interview with BW | Businessworld, Bosch Group India president and country head Steffen Berns explains the company’s philosophy. Excerpts:

How do you balance standarisation and localisation in a market like India, which is full of opportunities?
You have to understand what the market wants or needs. In automotives, we have a large but limited number of customers. We find out their requirements, then we look at our basket and product portfolio to see if we have anything available or if we need to do something new. Once you take this call, you ask: Where’s the competence to do this? If it’s here, we start developing products locally.

This has a long history. Originally, in the 1950s, when we started, we took global products. Then in different markets, systems developed at different speeds and directions. For example, trucks in India are much smaller than in other countries. The traffic situation, the fuel, everything is different, including emission legislation. Because of emission legislations, some countries had to go into electronic products, but we found out — looking at the price point and features — that there was still scope for further development of conventional products. So, in the late 1990s, India became the centre of competence for such products, and we were able to develop this further and branch off from the worldwide mainstream. At the time, it was an important step to say that we (Bosch India) take worldwide responsibility for certain products. As a next step, we introduced electronic systems in India too.

Are the learnings from India being used elsewhere?
You can’t do it for every product, but we have many examples such as the single-cylinder system (developed for India’s common rail systems). When we developed the first EMS (engine management system) for low-priced vehicles (Tata Nano was one of the customers), we had a greenfield approach to what was needed for a vehicle or an engine to work. Looking at how development of control units is done, processing power is getting cheaper and engineers worldwide are inventing new functions, which lead to bigger systems.

Then, once you start asking what’s really required, you can reduce quite a lot of functionalities. This is what we did to the EMS for low-priced vehicles, and it surprised even our own engineers that this was possible. This, then, formed the basis for a new low-end platform of vehicles in developed countries as well.

How much does R&D in India contribute to global development, especially in the early lifecycle of a product?
We have 10,500 engineers/developers in India. We are the largest engineering centre outside Germany and are working for various divisions. More importantly, we have matured in the engineering value chain. In process improvement, we had the first Indian coach in the early 2000s going to Germany and helping them improve processes. We used Indians as coaches for the rest of the world, including Germany.

We now have global responsibility for certain product lines — EMS and conventional fuel injection systems. We have been talking about the significant increase in our starters and generators business. We have a generator that we call the new base line, which was jointly developed by India, China and Brazil, starting from tech requirements to market needs. Now, it’s produced in different countries and also exported from India to European countries.

And, this is increasing. As there is more experience in India, there is a job and responsibility split between different locations. And, we are taking over more and more.

Recently, we opened a research and technology centre, which is the starting point of any development activity. We will see in which direction this is going to go, and we are also affiliated with the Indian Institute of Science, Bangalore, and other universities.

Is Bosch India involved in developing original equipment globally?
We have a region-for-region or local-for-local approach. Our targets are Indian customers, or global customers in India. If we talk of a new EMS, we are involved from Day 1 in the concept. You can’t build the engine and then think about the injection system and the control unit. You have to do this very early. The industry has matured quite a bit in 50 years. Competency levels have matured. We have Indian OEMs (original equipment manufacturers) with excellent capabilities, and many of them have their own engine platforms. There we are involved right from the beginning.

Is Bosch India involved in car-to-mobile development?
We are working in all these fields. We have many systems. One aspect is smartphone integration, where you use the smartphone and its computational power to use the apps in the vehicle. On all these systems, because there is a lot of software, the engineers in our software business are involved in the frontline. Also in the aftermarket, diagnostics is getting more and more important, as well as how you can do remote diagnostics. Typically, when there is software involved, India is involved.

What was the strategy behind entering into multi-brand Bosch car service centres?
We have some 3,000 service stations in India. We started here by focusing more on trucks, then we introduced car services as a worldwide concept as well. Recently, we introduced the express bike service in India.

And why the do-it-yourself (DIY) stores?
The DIY store is unique to India. You have to understand market needs; influence or create markets; find the right price points without compromising the brand; and need competent people and decision power. These are the key elements of Glocal strategy in a global company.

If you look at power tools, it’s typically all craftsmen’s. I, as a German engineer, have some 30 power tools. I do a lot myself and I learnt this when I was five, because my father also had 20 Bosch power tools. This is part of the culture... it is not part of the culture here. Now, you can say I will continue selling to professionals, or you can say it’s practical to do it yourself. My wife is always happy if I do it. It’s also a lot of fun. There are more people who want to be creative, who want to do it themselves; and it’s not just the drilling machine, but you also have a large variety of products where you can do wood carving or build bedside tables yourself and be proud of having created something. So, we set up these DIY shops where you can buy certain tools and also get some training and ideas on what you can do. We have two in Bangalore, but there will be more.

Bosch Global’s holding in Bosch India has been rising steadily. There’s a fear that Bosch will delist in India…
There is no plan to increase our current share further.

Is Bosch India making a shift from a business-to-business company to a business-to-customer company?
We have a share of only 12 per cent from non-automotives. In Bosch overall, we have a 34 per cent non-automotives share — that’s nearly three times. So, the growth potential in non-automotives is very high. Yes, we want to make use of this. Also, the potential in automotives is still high. We have to target growth in both areas. If we look at all the mega themes in India — energy, infrastructure, safety and security — we do have the right products.

How much can local teams experiment fearlessly and what’s the price of failure?
We have been pushing innovation. Sometimes we are successful, sometimes not. The DIY stores, the Bosch brand stores or bike services are all initiatives where we take a stance, and if we try it and it’s not working, the cost is usually relatively low. If we acquire a company and the transaction is not working, then the cost is high.

Delhi Government Moves Towards Bringing Back Detention Policy At Schools