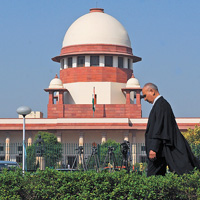 Independent India was born with a chip on the shoulder. Its colonial past made it instinctively supportive of indigenous entrepreneurs and hostile to foreign capital. This hostility imposed a heavy cost. Developing countries in Southeast Asia and Latin America achieved higher growth and diversification with foreign investment; India got stuck in the Hindu rate of growth, and achieved limited diversification away from agriculture. Few realised this in our insular country. But as secretary general of an international commission, our present Prime Minister travelled round the world in the 1980s and saw to his discomfiture how much India had lost. As luck would have it, his return coincided with the worst balance of payments crisis in independent India's history. Just when his own convictions changed, he got an opportunity to change policies and make India more open. Unfortunately, the xenophobia still lingered. So while P.V. Narasimha Rao's government liberalised foreign portfolio investment, liberalisation of foreign direct investment was left to the whims and fancies of the ministry of commerce and industry. Foreign direct investment continues to be a holy cow. But policy on portfolio investment has also become encrusted with successive emendations. The finance ministry constituted a working group in January to review it, which submitted a report with commendable speed.

Its recommendations apply only to foreign portfolio investment — i.e., below 10 per cent of equity. It does not ask how reasonable this limit is. From a nationalist point of view, all that matters is whether a company is controlled by a national of the government's choice. So if he owns more than 50 per cent of the equity, alone or  with partners and institutions of whom the government approves, it is immaterial how the rest of the shareholding is distributed. Such a simplification does not occur to the working group.

It places considerable stress on its recommendation that the three categories of foreign institutional investors, qualified venture capital investors and non-resident Indians should be combined into a single category called qualified foreign investors. This is pretty uncontroversial. Non-resident Indians were a great favourite of the previous NDA government. At a time when the country was short of foreign exchange, it might have made sense to appeal to their love for the home country. Those days are gone, and are best forgotten. And as to venture capital, there is no need to distinguish between foreign and indigenous capital.

India has hardly a debt market worth the name, and the idea of using foreigners to develop it has held attraction for a long time. The working group has also succumbed to it. However, even the most talented foreigners cannot develop a debt market unless the biggest debt issuers market their bonds. They are the central and the state governments. They do not need to sell their bonds because the government can force the banks it owns to buy as much debt as it wishes. Foreign investors are irrelevant to the debt market. The governments are central to it; it is they that have to change their ways.

A major controversy has recently been stirred up by the attempt of the finance ministry's central board of direct taxes to collect capital gains tax on shares in an Indian telecom company bought abroad by Vodafone. The Bombay High Court has ruled in favour of CBDT, and Vodafone has appealed to the Supreme Court. Replete as it was with government representatives, the working group could hardly have taken an independent view. But it appears to be in favour of taxing people on the basis of where they reside, and not on the basis of where they get their income from. That cannot, however, be done unless all countries agree to do so consistently, and unless they jointly create and share a directory of residents. Neither is likely to happen in the foreseeable future. By opting for an impossible optimum, the working group has implicitly supported the status quo, in which the CBDT can tax anyone it likes. That, however, is not likely to strengthen India's reputation as a law-abiding country.

The most important recommendation of the working group, however, is that law departments should be integrated into the policy process, and that government departments must follow due legal process. That is an unspecific, uncontroversial way of putting the point. But the point itself needs to be stressed. The revenue departments of the finance ministry are recklessly focused on collecting revenue, and treat due process with contempt. They need to change their ways.