A Hard Road Ahead 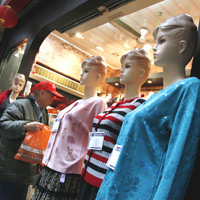 There seems to be no end to the struggles of the cash-strapped Pantaloon Retail India. The Kishore Biyani-promoted company is still contemplating "many options" to raise money to fund its expansion plans and also to pay off a huge debt, running into Rs 2,500 crore.

A company source says that apart from talking to private equity players such as Bain Capital, Pantaloon hopes to list one of its retail subsidiaries to raise capital. According to him, the promoters' stake will not be diluted. The company had earlier raised Rs 367 crore when the promoters increased their stake to 49 per cent from 35 per cent through preferential share allotment. Pantaloon has also renegotiated its annual debt cost of Rs 450 crore, now payable over a longer maturity period.

Sources say that Biyani could close a deal with a couple of private equity players within a week or two. If these deals fall through, then the road to recovery would be long and hard.

STRICTLY BUSINESS
Investors in Germany, Europe's largest economy, seem to be riding on recovery hopes. Their confidence rose the highest in August since 2006, according to the index of ZEW Center for Economic Research. The index reached 56.1 points in August from 39.5 in July. However, experts caution the country could be heading for another credit crunch.