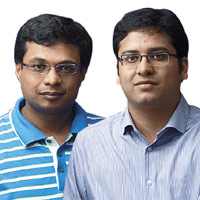 08 November, 2014
Print this article Font size -16+
There’s simply no stopping them. Determined to make the company they founded a $100-billion entity in the next few years, the Bansals of Flipkart — Sachin and Binny — have raised $1 billion (approximately Rs 6,000 crore), taking the online retailer’s valuation  to $7 billion. With this latest funding, the duo, boasting of a combined net worth in excess of $1 billion, has now moved closer to iconic tech billionaires N.R. Narayana Murthy and Nandan Nilekani of Infosys.

wireless carrier Softbank. After nearly a decade with the search giant, he will join as the CEO of the newly formed SoftBank Internet and Media Inc and vice-chairman of the overall company in October. Omid Kordestani, Google’s business founder who led the sales team for many years, will take Arora’s job.

Gautam Adani may not have landed Jaypee’s hydropower assets, but he has no reason to lose heart. The Australian government has cleared Adani Mining’s $16.5-billion proposal to build a coal mine, among the world’s biggest, in Queensland. The value of the thermal coal resources, over a 60-year period, has been pegged at $300 billion. At full production, the Adani project is estimated to add $2.97 billion to Queensland’s economy every year. Besides clinching this big ticket project, Adani is also planning to acquire power plants with a total capacity of 5,000 MW.

Making A Mark
Facebook founder Mark Zuckerberg is now the 16th richest person in the world. A surge in the company’s stock price recently earned the 30-year-old a whopping $1.6 billion in a single day, putting his net worth at $33.3

billion. He is now wealthier than fellow tech billionaires Sergey Brin and Larry Page, the co-founders of Google, as well as Amazon CEO Jeff Bezos. Brin and Page are ranked as the 17th and 18th richest people in the world, according to the Bloomberg Billionaires Index. Bezos comes in at number 20.

New Venture
The elder son of Wipro chairman Azim Premji, Rishad Premji, chief strategy officer at Wipro, will be spearheading the new corporate venture arm of the IT giant. The first-of-its-kind venture by an Indian outsourcer will initially invest up to $100 million (Rs 600 crore) in startups. The fund will explore investment opportunities in startups that focus on niche technologies such as data and industrial Internet, among others.

Room With A View
Sahara chief Subrata Roy’s lawyers may not have been able to get him out of jail, but they have succeeded in making his stay more comfortable. In response to Sahara’s plea seeking a deal room to help Roy raise the
Rs 10,000 crore set by the court as a condition for his bail, the Supreme Court has asked the Delhi government to explore a venue within Tihar Jail where he can hold negotiations with buyers. Roy has further sought permission to shift to the Tihar Jail guest house for a week.

Central Role
S. S. Mundra, chairman and managing director of Bank of Baroda (BoB), has been appointed the deputy governor of the Reserve Bank of India. Sixty-year-old Mundra — nominated in place of K.C. Chakrabarty, who retired nearly three months before schedule, in the last week of April — has been given a three-year term.