A Formula For Growth 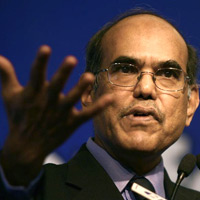 08 November, 2014
Print this article Font size -16+
The Reserve Bank of India cut its key lending rate by a quarter per cent for the first time in nine months. The Repo rate, which is the rate at which the central bank lends to commercial banks to meet shortfalls will now stand at 7.75 per cent, while the cash reserve ratio, which directly impacts liquidity in the banking system was reduced to 4 per cent. The reduction in cash reserve ratio is expected to release Rs 18,000 crore into the banking system.

"The stance of monetary policy in this review is intended to provide an appropriate interest rate environment to support growth as inflation risks moderate," Subbarao said unveiling the policy.

The RBI's decision to cut was a nod to the structural policy progress the government has delivered so far, although much more clearly needs to be done to re-invigorate investments and the supply side. The RBI also appears to have given the government the benefit of doubt, for now at least, when it comes to delivering fiscal consolidation.

While repo rate cut will reduce the cost of borrowing for individuals and corporates, the reduction in CRR,  which is the portion of deposits that banks have to park with RBI, would improve the availability of funds.

The RBI decision will help revive investment in the economy, said Montek Singh Ahluwalia, deputy Chairman of the Planning Commission, adding that the economy was beginning to bottom out after a long slowdown.

Home, auto and corporate loans can be expected to get cheaper after the rate cut. Soon after the Reserve Bank unveiled its mid-quarter review of the monetary policy, several bankers hinted that they may consider rate cut in their ALCO (Asset Liability Committee) meeting. Indian banks will cut lending rates after the central bank reduced its key interest rate by 25 basis points on Tuesday, the head ofindustry body Indian Banks' Association, K.R. Kamath, said in a post-policy conference.

Echoing similar views, Bank of India executive director N Seshadari said most of the banks are likely to transfer the rate cut. "Full transmission will happen on both lending and deposit rates. A 0.25 per cent cut is most likely."

Growth Deceleration
The policy comes in the context of a significant deceleration in growth (the outlook for FY13 growth has been reduced for 5.5 per cent) as well as an easing in the momentum of inflation. The policy also stated that with headline inflation likely to have peaked and expected to remain range-bound, "there is space, albeit limited,  for monetary policy to give greater emphasis to growth risks".

Industry was prima facie happy with the fact that RBI appeared to be aligned with the government in getting growth back. Chandrajit Banerjee, Director General, CII, welcomed the RBI bid to cut repo rate and the CRR as a positive move but said CII would have been happier with a larger reduction in the headline interest rates.

A weak consumption and investment demand has been derailing the growth momentum of the economy, and today’s announcement would help improve consumer and investor sentiments, said Banerjee.

Dr Arun Singh, Sr Economist, Dun & Bradstreet India said: The 25 basis points cut in CRR and repo rate indicates increasing concerns over the liquidity conditions, flow of credit and growth moderation. The RBI’s shift in its monetary policy stance to arrest the loss of growth momentum along with the various measures undertaken by the Government since mid-September 2012 is expected to further boost the sentiment of the business community and support investment activity in the economy. Growth in the second half of the current fiscal year is expected to witness some buoyancy with GDP growing at a slightly higher level than that witnessed during the first half. Nonetheless, GDP for the current fiscal year is likely to remain below 6 per cent.

Lakshmi Iyer, Sr Vice President and Head, Fixed Income, Kotak Mutual Fund expects further rate revisions as does Indranil Pan, Chief Economist, Kotak Mahindra Bank. “While the 25 bps cut in repo was expected, its realisation has provided a palpable relief to the markets", said Iyer. Pan expects a further to 50 bps cut in repo rate during the rest of CY2013.

Leif Eskesen, Chief Economist for India and ASEAN, of HSBC Global Research thinks there is room for further rate cuts, but it is likely to be limited to another 25bp.

Sandeep Nanda, Chief Investment Officer, Bharti AXA Life Insurance, also said the repo rate cut was as per  expectations. “The surprise was the cut in CRR by 25 bps to infuse liquidity into the system which has remained tight in Oct - Dec 2012 quarter."

"The change in the RBI's stance coupled with the recent economic policy reforms and likely fiscal consolidation in the upcoming budget makes us cautiously optimistic on equities as well.

Dithering Over Rate Cut
The central bank has been dithering on a rate cut so far since inflation stayed stubbornly high. A rate cut,  which would effectively put more money in the hands of people could exacerbate the inflation levels in the economy. But its hand seems to have been forced with factory output as well as GDP contracting significantly towards the end of 2012. The RBI's decision to cut policy rate was also helped by the government's decision to deregulate diesel prices last week. The massive subsidy on diesel, which had to paid for by the government through additional borrowings, was straining the economy.

While, industry was hoping for a higher reduction in rates, the commentary seems to be giving comfort, with the benchmark stock index Sensex rising slightly immediately after the announcement. "I think this is the right thing to do at this point of time given that (the decline) in economy is beginning to bottom out," said Subbarao. But the question will be will this translate into lower interest rates on borrowings.

The Governor in his address to bankers immediately after the policy announcements also stressed about the risk from global headwinds, namely the debt ceiling limit in the US, warning that an adverse outcome could have an impact on the Indian economy. The ever-widening current account deficit also came for mention, with the Governor re-iterating the risks to the economy coming out of vulnerability to sudden movements to capital.

"Even though net capital flows have been strong, the sheer size of the external financing requirement imposed by the large CAD has brought to bear downward pressures on the rupee which depreciated in nominal and real terms by January 2013, relative to its level in March 2012," the policy said.

Exports have been falling for the past eight months, while RBI said overall there has been a modest
improvement in the global economic prospects since the last quarter of 2012.

Deficit Dilemma
Warning that too much dependence on volatile and risky capital inflows to finance CAD is risky, the RBI said such dependence "increases the economy's vulnerability to sudden shifts in risk appetite and liquidity preference potentially threatening macroeconomic and exchange rate stability."

Partly blaming the historically high CAD to fiscal imprudence, the central bank said the inability to reign in the fiscal deficit will "accentuate the CAD risk, further crowd out private investment and stunt growth impulses."

Answering criticism of holding on to high rates for so long, Subbarao said that apart from the high inflation, RBI was forced to pause because of lack of complementary efforts from the fiscal authorities.

On the reforms process, Subbarao said there is a need for further reforms to raise productivity, improve competitiveness and manage supply constraints to support growth which has been below trend for quite some time.

The central bank's decision to cut rates will help revive investment in the economy, Montek Singh Ahluwalia, deputy Chairman of the Planning Commission said, adding that the economy was beginning to bottom out after a long slowdown.

"This is a good trigger, said J.C. Sharma, managing director, Sobha Developers. "Because the real estate sector is rate sensitive the market believes that any rate cut will help push demand. From a customer's point of view this will improve liquidity and reduce the interest burden."

The RBI will come out with mid-quarter review on march 19 and the annual policy on May 3.