A Concoction Of Stories 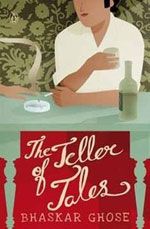 08 November, 2014
Print this article Font size -16+
First things first. If you are expecting a fast pace page turner or perhaps a novel with a lot of twists or melodrama, a trick some Indian authors seem to have mastered, this book is not for you.

The Teller of Tales (not to be confused with the one written on Sir Arthur Conan Doyle by Daniel Stashower) is a simple book about life, certainly not the best one at that though, but a very good read nevertheless. The story line of the book is rather simple but if you could get through the first 20 pages, the characters will start to grow on you, especially Arunava Varman, the central character of the book.

The protagonist Tapan Biswas is a West Bengal cadre IAS officer who lives, or rather prefers to live alone in his own shell. But Tapan does have a friend in Arunava, a senior IAS officer and a ‘strikingly attractive’ one too. Arunava, too like Tapan, prefers to stay alone, but is different to a point that he has a habit of telling an anecdote or two after being blessed by the Bacchus.

The story explores the platonic relationship between the two men, who as Tapan realises towards the end of his journey, was more of a brotherly bond than plain friendship.

Tapan and Arunava share similar interests in theatre, liquor and of course women. The book progresses with Tapan -– “the greatest actor of all time” -- and Arunava growing from young IAS officers posted in adjoining districts in north Bengal to middle aged men expecting different things from life. While Tapan continues with civil services Arunava quits the service to become a teacher.

The high point of the book is when Arunava speaks to Tapan through the recorded message. Also, look forward to the point when Arunava offers Glenlivet to Tapan and the conversation that follows. Every time Arunava comes in the picture, the book gets interesting, especially with his tales and philosophy about two realities.

Ghose’s characters have an air of mystery around them. Arunava’s character is well developed with the entire enigma and self inflicting pathos. While it is understandable that the book is primarily about Tapan and Arunava and their relationship, the parallel stories are too weak and look insufficient. Especially the office politics part where a problem develops but fizzles out just like that.

Sure, the poems by Arunava adds flavour to the story line. Yet, it is Shakespeare’s couplet that really captures the heart of the book… “Our revels now are ended. These our actors, as I foretold you, were all spirits, and are melted into air, into thin air…. We are such stuff as dreams are made on; and our little life is rounded with a sleep.”