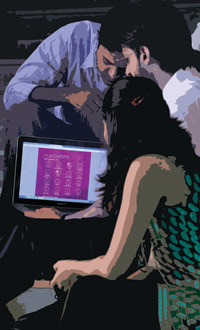 08 November, 2014
Print this article Font size -16+
By May every year, most b-schools start focusing on the orientation for new batches. This year, however, all their energies continued to be directed at getting placements for final year students who hadn’t got lucky. The placement committees were hard at work; and, unlike the past couple of years, the ‘slowing economy’ stung the Indian Institutes of Management (IIMs) as well.

Till convocation day, IIM Lucknow still had 60 students (of about 420) who were yet to be placed, say students who were part of the exercise. The institute finally decided to hire a private placement agency, but it is yet to see 100 per cent hiring. IIM Kozhikode saw a dip in the number of offers per company, says C. Raju, chairman of the post-graduate programme.

The situation was equally grim at the other IIMs, which extended their placement season this year. While rolling placements eventually lead to all students getting jobs, this time around even that was not the case, with many still awaiting a call. Besides, the few options open were more about availability than choice.

Megha Pathak, 25, from IIM Lucknow ended up accepting a marketing job with a startup. “I was looking for a role in finance, ideally with a retail bank. But the finance sector was the worst hit and some profiles weren’t offered at all.” Many like Pathak feel the offers didn’t have any special incentives for management students.

Kanwal Kapil, placement chairperson at Management Development Institute (MDI), Gurgaon, says though the institute saw 156 companies on campus, compared to 125 last year, the number of offers remained the same. “Placements were not as good as last year... Companies reduced their intake but did not stop coming (to the campus) to maintain their relationship with us,”  he says.

Faculty of Management Studies (FMS) faced a similar situation. “Despite the market conditions, we placed most of the students, if not all,” says the Delhi-based school’s placement coordinator Mala Sinha.

“Even though a number of new companies joined, the total number of companies went down. The number of students a company picked also saw a decline,” says Uday Salunkhe, group director of Welingkar Institute of Management Education and Research, Bangalore.

The overall uncertainty in the economic environment has made matters worse this year. “Companies have become cautious in hiring. The steady flow of worsening economic data has affected business growth expectations, which are key to hiring,” says Rekha Sethi, director general of the All India Management Association (AIMA).

If all this wasn’t bad enough, it gets worse. Average salaries, too, have either remained flat or dipped. For IIM Rohtak, the average salary came down to Rs 19.5 lakh from Rs 28 lakh last year. “The job market was a bit slow, especially in the finance domain. And, with the nearly 2.5-fold increase in batch size, the placement scenario was more arduous,” says Tushar Rhode, placement coordinator at IIM Rohtak.

MDI was among the lucky few where salaries did not fall. Its average salary was Rs 21.8 lakh, up marginally from Rs 20.8 lakh last year.

Uphill Climb
Mid- to lower-rung colleges have been hit harder. Jagannath International Management School, at Kalkaji in Delhi, saw its highest package come down to Rs 7 lakh from about Rs 10 lakh last year. The average salary, however, remained constant at Rs 4.2 lakh per annum. “This year, no bulk hiring happened as was the trend last year,” says Anupa Sen, placement head at the B-school.

In a first, many companies preferred to recruit students based on their home towns rather than change their location and bear the extra relocation cost involved.

Missing from the action were PSUs, thanks to a court order restraining them from on-campus hiring. “PSUs who hire in significant numbers did not recruit at all,” says Pritam Singh of International Management Institute, which failed to place 19 students of its last batch.

Given the global economic environment, international placements have dipped too. The international salary packages at MDI, for instance, dropped to Rs 32 lakh versus Rs 43 lakh last year. “In 2012, companies were offering postings in Europe. This time around, the international job offers were mostly in Africa as Europe is in trouble and, hence, the cost-of-living factor brought down salaries,” says Kapil of MDI.
break-page-break
The global slowdown impacted the niche Indian Institute of Foreign Trade (IIFT) as well,  leading to a dip in international postings. There were only 7-8 international offers made against 16-17 last year. “Africa and Singapore saw significant drops,” says Munish Bhargava, placement advisor at IIFT. The college usually sees 8-10 per cent of its students getting placements in Singapore, and countries in Africa, Europe and West Asia.

Students looking for lateral roles didn’t have much choice either. “It was difficult to place people who came with some experience, as middle-level hiring was not happening,” says FMS’s Sinha.

Bright Sparks
The MNCs and the PSUs may have stayed away, but a new breed of employers came rolling in — startups. “These small firms were non-existent on campus last year. This year, 35 made offers for senior roles like head of marketing,” says V.K. Menon, senior director of career advancement services at Indian School of Business (ISB).

The same was true for FMS. “There were very smart people from young companies who came calling. These firms want to scale fast and want good talent,” says Sinha. “The startups might not pay that well but offer more exposure. So, many students opted for them.”

Salaries and jobs may have changed, but what didn’t were the top sectors — banking, consulting and IT. “Students knew the situation wasn’t good and accepted IT consulting jobs,” says Kapil of MDI.

Like last year, the most jobs at IIM Bangalore came from the management consulting and finance sectors, while manufacturing companies had fewer offers to make. At ISB, too, consulting and marketing offers led — consulting with almost 27 per cent of the hiring pie, and sales and marketing with 21 per cent.  Healthcare was a significant contributor, but infrastructure was slow.

This year saw the largest ever participation by consulting companies, says Sinha of FMS. Some of the firms that hired were The Boston Consulting Group, Accenture Management Consulting, Ernst & Young and Deloitte; Capgemini was the biggest with 12 offers.

For ISB, the most offers came from the technology sector. “Three hundred offers were made by 53 companies, including Apple, Cognizant, Facebook and Google,” says Menon. Around 30 firms, including AT Kearney, Accenture, BCG and Deloitte, made 163 offers.

Another trend that came to the fore was pre-placement offers (PPO). Recruiters were hiring strategically and, of course, no one wanted it to be a costly affair. “Companies were more inclined towards those who did their summer internships with them,” says Kapil.

Adds Sinha: “The environment was healthier during August-September (the internship period).”

“It (internship) is a good opportunity for the company to assess the student over the course of eight weeks,” says Bhargava of IIFT, which, too, saw a significant jump in PPOs — 46 offers versus last year’s 28-odd.

Anything short of a stellar 100 per cent placement doesn’t quite cut it. The difficult season across the board this year may be a sign of worse times to come.