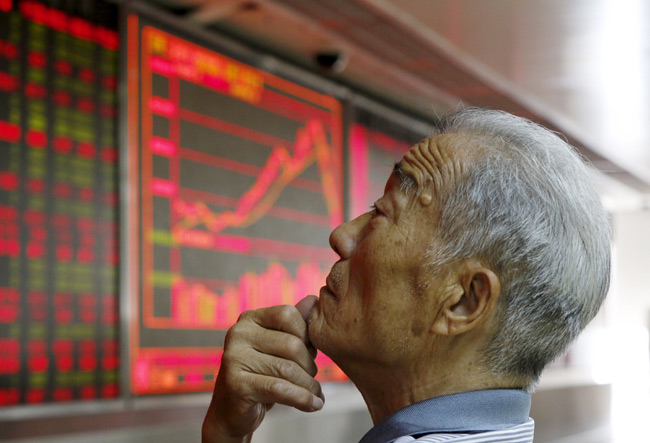 Over the past year, a massive bubble brewed up in Chinese assets, even as growth slowed. That bubble is now bursting. Leading experts on financial markets say that while there has been a knee jerk reaction to the crash in all Asian markets, India may not suffer in the long run.

However, policymakers around the world are looking on with growing concern that turmoil in the stock markets will spill into China's real economy, the second-largest in the world and a huge engine of global growth.

Some market analysts have likened China's boom-to-bust market to the dot-com bubble in the US, when furious, irrational buying eventually led to a Nasdaq burst in 2000.

In 12 months, China's stock markets rose enough to create $6.5 trillion in value - enough to pay off Greece's debt 20 times over. No other stock market has ever grown that much in dollar terms. The real mystery of the Chinese stock market boom is its disconnect with the real economy. While the stock market has surged, the Chinese economy has finally begun to slump after decades of strong growth, according to a report in The Washington Post.

Since June 12, the Shanghai Composite has lost an unnerving 32 per cent. For China, this isn't just a financial crisis, it's a political one. That's why the Chinese government is doing everything it can to try to stop the bleeding.

China has tight control over capital flows and restrictions on foreign participation in its stock market. Market analysts say India's markets aren't too closely connected to fortunes in China. At present, India remains insulated from any direct impact from crisis in China.

1) As China's record-breaking equity boom goes bust, President Xi Jinping is intervening in an attempt to prevent the rout from eroding confidence in his leadership. The main reason for the Chinese government reaction to the stock market could be that it has routinely taken credit for the stock market's bullish performance, often claiming that this was attributable to the economic reforms. The state media publications had urged the public to invest in stocks, and other government initiatives opened up markets to foreign investors.

2) Unlike most other stock markets, where investors are mostly institutional, more than 80 per cent of investors in China are small retail investors. They made risky investments often bypassing rules, according to analysts. Estimates say that borrowed money helped push the stock market 150 per cent since June last year.

4) China is one of India's largest trading partners, accounting for about $70 billion in two-way trade. India sells iron ore, metals and metal alloys, auto parts, textile yarn, chemicals, engineering goods, pharmaceuticals and tobacco worth about $27 billion to China. This market is now under threat by a looming slowdown, which has triggered a massive meltdown on the bourses.

5) The Chinese market regulator has barred big shareholders and executives of listed companies - who have stakes exceeding 5 per cent - from selling their shares for the next six months.

6) Some long-term investors are cutting their exposure. Many have made good profits over the long term (the market is up 150 per cent on a year ago) and so as things get rocky, they are getting out.

7) The Chinese economy seems to be losing momentum, despite a string of market interventions by the authorities. A new $40 billion (250 billion yuan) plan announced on Wednesday to foster growth in areas of the economy that need it most. China will also speed up infrastructure spending that the government was already planning to do such as building roads and utilities.

8) China's central bank has cut rates to a record low in an effort to pump more money into the system.

9) Investors now have more options to back their margin trades. Many investors speculated on stocks -- they would borrow money to buy stock because they thought the stock would go up and they would make enough money to pay back the loan and make a profit. Chinese investors can even pledge their homes as collateral, according to Bloomberg.

10) The China Securities Regulatory Commission said separately that China Securities Finance Corporation, a government-backed fund, would provide "abundant liquidity" to help steady the market. State-owned enterprises have also been directed towards share buybacks. So far, 292 companies have pledged to buy their own stock, according to state media.