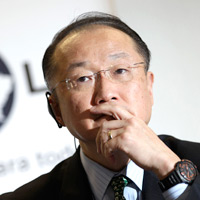 08 November, 2014
Print this article Font size -16+
Indian economy is likely to grow at a rate of 6 per cent next year and probably more thereafter as exports markets start doing better, World Bank President Jim Yong Kim said Monday. India will get back to higher levels of growth, Kim said even as he expressed disappointment over 5 per cent growth (the projected rate for this financial year).

"India is going to grow by 6 per cent next year and we hope for even more increase in future," Kim told reporters after a meeting with Finance Minister P Chidambaram here.

Kim, who is on a three-day visit to India, said: "Growth rate of 5 per cent here is one that has been somewhat disappointing but we are very encouraged by what has happened and what will happen and we think India will get back to higher levels of growth."

The Indian economy is subject to global slowdown, he said, adding that "as export market starts doing better, we think India will do better as well".

In his meeting with the World Bank chief, Chidambaram underlined the need for enhancing the capital base of the World Bank to meet the challenges of poverty reduction and infrastructure development in the developing countries.

Besides, issues related to global economy and its impact on India were discussed, a Finance Ministry statement said.

India's share in global economy almost doubled in five years between 2005 and 2010, Kim said while lauding efforts of the Finance Minister to ensure high growth rate in future.

Kim is scheduled to visit Uttar Pradesh tomorrow and meet Chief Minister Akhilesh Yadav. He would visit Lucknow and Kanpur to see development challenges in the state, which accounts for the largest number of India's poor.

This is Kim's first visit to India after taking over as President of World Bank Group in July last year.