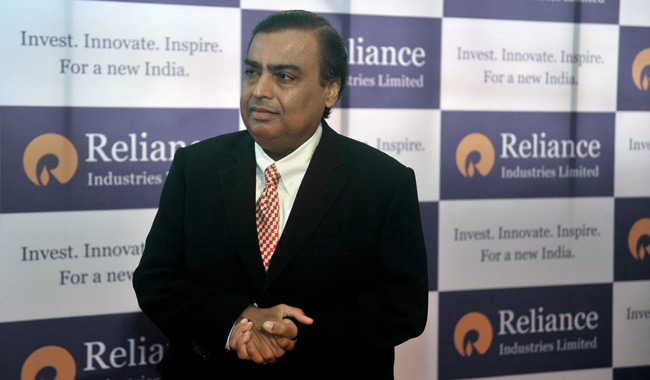 16 June, 2015
Print this article Font size -16+
The much awaited broadband services from Mukesh Ambani backed Reliance Jio will be launched in December this year, five years after it first bought spectrum. Outlining the roadmap, Mukesh Ambani, Chairman, Reliance Industries,said the comapny plans to complete projects worth over Rs 2 lakh crore in the core oil and petrochemical businesses over the next 12-18 months.
With Reliance's entry, the mobile data price war is going to get tougher for existing telecom operators as well, since the RIL enterprise aims to bring mobile data prices to a new low for greater penetration.
Ambani said that the company sees 4G-enabled smartphones under its own brand name "Jio" will be priced under Rs 4,000.
"We are currently in the pre-launch testing and stabilization phase of this large and complex network. Over the next few months, we will initiate an extensive beta launch involving millions of friendly customers across all our markets," Ambani told shareholders here.
Reliance Jio service will cover all 29 states of India, and reach 80 per cent  of the populace at the time of launch. It will cover 100 per cent of the population in the next 3 years, Ambani said.
The RIL chairman said he is confident that Reliance Jio will play a significant role in boosting India's global internet penetration rank from 149 to among the top 10.
Ambani added that the company is committed to net neutrality, a hot topic in India, and has the largest swathe of liberalized spectrum among all telecom operators. He also said that Reliance Jio investments are in line with NDA government's Digital India vision.
Looking to reap full benefits of these investments from the financial year 2016-17 onwards, Ambani said RIL would have a unique portfolio of globally competitive petrochemical and refining business with a new age India-centric consumer business with very high growth potential.
"This will place Reliance in a select group of most valuable companies in the world," he said, addressing shareholders at the annual general meeting of Reliance Industries Ltd (RIL), which also operates the world's largest crude oil refining.
Here are five key takeaways from Reliance Industries AGM
Reliance Jio

Ambani says that we are expanding RIL Jio's footprint to cover nearly 80 per cent of India's population by the end of this year. Our roadmap is to have 100 per  cent national coverage within the next 3 years.
Jio is the first 4G broadband wireless operator to achieve wireless coverage far in excess of the rollout obligation as per its license conditions. Jio has also deployed a network of nearly 250,000 route kilometres of fibre optics, thereby creating a future-proof digital backbone across India.
He further highlighted that Jio's broadband assets will be the bedrock for the digital India. The financial year 2016-17 will be the first full year of commercial operations for Jio.
"The combination of Jio's strong initiatives and a supportive global environment, gives me the confidence that we will see 4G LTE smartphones in India at prices below Rs 4,000 by December of this year," he adds.
Retail

Reliance Retail operates across various product categories and formats has attained revenues of over Rs 17,000 crore in the last year. RIL achieved a record profits of Rs 784 crore at an EBITDA level.
Despite the challenges faced in a tough consumer environment, this business achieved a compounded annual revenue growth of 31 per cent in the last 5 years, highlights Ambani.
The company plans to accelerate their pace of growth by adding 930 new stores last year which effectively translates to introducing 5 new stores every two days - setting a new global benchmark in terms of the largest number of store openings in a year.
They currently have a network of over 2600 stores and presence in 200 cities 20 states. Reliance Retail offers employment opportunities for growth to over 50,000 associates across the country.
Petrochem

Reliance Industries petrochemical business consists of polyesters, fibre intermediates, polymers, synthetic elastomers and a variety of chemicals and solvents.
Ambani says that we continue to strengthen our global polyester leadership position by increasing capacity and continued focus on operational excellence. Last year RIL commissioned a fully automated polyester plant at Silvassa with a capacity of around 400,000 tons.
They have brought on-stream 1.15 million tons per annum of PTA capacity. We will be ready for start-up of another 1.15 million tons per annum of PTA capacity at Dahej by October this year. With this, RIL total PTA capacity will be 4.5 million tons per annum, making it the fifth largest PTA producer in the world.
Oil and gas exploration

RIL discovered India's largest gas reserves in the deep waters of Bay of Bengal, under NELP. Within a short span of just two and a half years of D26 discovery and six and a half years f D1-D3 discoveries, RIL had brought two challenging deep-water fields in the KG-D6 block into production.
The block has already produced nearly 2.5 TCF of natural gas and about 27 MMBBL of crude oil, which have so far substituted over US$ 34 billion of energy imports, says Mukesh Ambani.
He went on to add that we are aware that future investments hinge upon the continuing confidence of our shareowners in this high risk business.
In spite of falling oil and gas prices which created a tough operating environment, RIL's Shale Gas business in the US generated revenues close to $ 1 billion during the year.
Refining
Refining and marketing continues to be a significant contributor to Reliance's profitability, delivering a strong financial performance during the year 2014-15.
"Amidst such an environment, Reliance posted a GRM of $8.6/bbl, outperforming Singapore benchmark yet again, with a premium of $2.3/bbl," Mukesh Ambani said.
He further added that RIL plans to re-commission the entire network of petroleum retail outlets by the end of FY 2015-16. Currently, close to 400 outlets are operational. RIL is also implementing a Coke gasification facility at Jamnagar, which is also one of the largest clean coal initiatives in the world.
Click Here To Read Mukesh Ambani's Full Speach
Tags assigned to this article:
retail telecom reliance industries mukesh ambani reliance agm petrochem othertop2 reliance jio