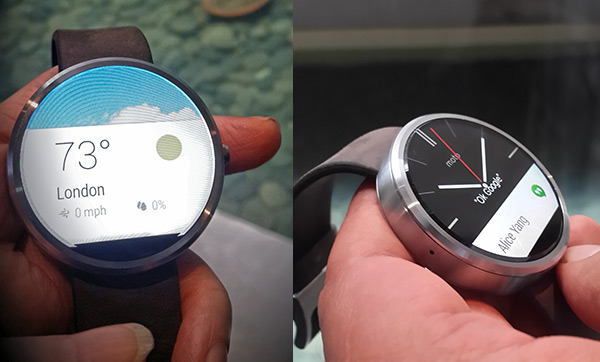 08 November, 2014
Print this article Font size -16+
It overflows right off my wrist but that doesn’t stop me from lusting after the Moto 360 smartwatch. There are other designs of smartwatches that wrap around the wrist like a band and don’t end up snipping a little chunk at the bottom so text can fit in, but the Moto 360 is still compelling to the extreme.

First, it’s so familiar in its look – like a real watch. I’ve given up on them long ago, but I do believe, those of us born wearing watches still have that watch-glancing instinct. When you long-press on the watch face, you’ll find a bunch of options to change its look, so you can go as new-fangled or old-timer as you like.

The screen, a big 1.5 incher, is about as big as my first phone was. It’s a bright LCD with a 320x290 pixels resolution. The screen really draws your eyes to it. To interact with it, you swipe or use your voice – Okay Google, or if you choose, set that to something else. There’s no little keyboard, so you’ll need to input things by voice. The text on each screen is nice and big and visible and that makes it usable by more people.

The Moto 360 is based on Android Wear, Google’s platform for wearables, and works with any phone running Android 4.3 and above. It connects to the phone via Bluetooth and a sign-in to a Google account. Then there’s software on both devices to let the user get into the applications.

And just like a real watch, the device has a real leather strap (changeable) and comes with either a metallic casing that’s either light or dark, the light looking more steely and masculine. The watch even comes in a round box. There’s a wireless charging dock so that there’s no fiddling with little micro USBs. The battery is a 320mAh and is intended to last the day, so you’ll need to get used to charging it when you charge your phone, perhaps.

What really brings the watch alive is Google Now. You get notifications and Google cards like weather, flight status etc and even your boarding pass – which of course will only be useful if the airport and airline supports it. An OK Google immediately activates search.

Of course, the Moto 360 also does the usual tracking of steps and activity and heartbeat and so on. Smartly, it collects all the data to show you weekly stats and even measures “healthy minutes” which come about when there’s enough vigorous and sustained activity.

Launched on Friday (5 September) in New Delhi, the Moto 360 will be available on Flipkart a few weeks down the line, along with the Moto X smartphone. No price has yet been announced but Charlie Tritschler, Senior Vice President Product Management at Motorola, hinted that the price would be acceptable to Indian buyers. Going by US pricing, it’s estimated to be about Rs 15,000.