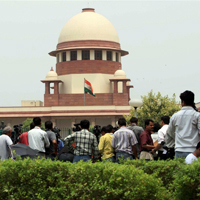 Be it the witness box in trial courts or corridors of the Delhi High Court and the apex court, names of business tycoons like Mukesh Ambani, Kumar Mangalam Birla, Naveen Jindal and Ravi Ruia cropped up in controversial matters and cases which are under scrutiny in different judicial forums.

The patent battle saw domestic pharmaceutical firms getting a major boost with the apex court dismissing the plea of Novartis for patent of a cancer drug Glivec, paving the way for Indian companies to manufacture cheap generic drugs.

So was the case in the high court where US-pharma major Merck Sharp & Dohme (MSD) failed to get any relief against Indian Pharma Glenmark which has come up with generic anti- diabetic medicines. An intra-court appeal against the order is pending before a larger bench.

However, the year was tough for Sahara India Parivar as Roy was not only restrained from leaving India but he and his group firms were accused of taking the apex court "for ride" and "playing hide and seek" in the case relating to refund of Rs 20,000 crore to investors in which they are facing contempt proceedings.

More trouble came when the apex court said that contempt proceedings can go ahead against Roy and his two employees for interfering with the investigation into the 2G spectrum case.

A day after ADAG chief's testimony, his wife Tina Ambani also made her appearance in the Patiala house court and recorded her statement which was described as "better than her husband" in answering questions by special judge O P Saini.

Government's controversial decision to hike the price of natural gas reached the Supreme Court which agreed to examine the issue raised by CPI MP Gurudas Dasgupta who filed a PIL accusing Petroleum Minister M Veerappa Moily of allegedly favouring Mukesh Ambani's Reliance Industries Ltd (RIL), which have been refuted by them.

If 2012 was the year of 2G scam, then 2013 would be recorded in the history of the apex court for coalgate case and CBI's clamour to attain autonomy and free itself from its political masters to investigate top bureaucrats.

The high voltage hearing in the coal scam saw the apex court taking strong exception to the interference into its probe by the then Law Minister Ashwani Kumar, who was forced to resign.

CBI, which was termed as "caged parrot" by the apex court during the hearing in the coal scam, came out all guns blazing and named corporate bigwigs Naveen Jindal and Kumar Mangalam Birla in separate FIRs registered in connection with the case.

The controversy surrounding former corporate lobbyist Niira Radia's tapped conversations was dealt by the apex court and after long hearing, it directed CBI to probe some key issues in which names of some big corporates, politicians, bureaucrats and journalists cropped up.

It also directed CBI to probe into allotment of coal blocks to Sasan Power Project run by ADAG and allotment of iron ore mines at Ankua, in Singhbhum district of Jharkhand to Tata Steel.

Out of 23 issues which were framed by a court-appointed probe team on the analysis of tapped conversations of Radia with bureaucrats, politicians, corporate tycoons and scribes, the apex court ordered CBI probe in 14 issues.

During the year, the Supreme Court also made it clear that it would quash the Jet-Etihad Airways deal if there are any irregularities in it.

It also issued notices to Centre on a plea for putting on record a memo sent by PMO to the Corporate Affairs Ministry in which the PMO had allegedly raised serious reservations in respect of the growth of the middle eastern carriers including Etihad.

Sterlite Industries, a subsidiary of UK-based Vedanta Group, was directed by the apex court to pay Rs 100 crore as compensation for polluting environment through its copper smelting plant in Tamil Nadu.

During the year, the apex court set aside the Orissa High Court order which had quashed the state government's petition to allot iron ore licence to steel major Posco in Khandadhar hills in Sundergarh district for a multi-crore steel plant.

The Delhi High Court too was seized with some important business matters, including the controversy surrounding the AirAsia deal and a plea filed by Nokia for lifting of stay on sale of the assets.

Paving the way for Nokia's sale to Microsoft under its $7.2 billion global deal with the US giant, the Delhi High Court ordered defreezing of its assets with conditions including that Nokia Finland shall be jointly liable to pay tax demand raised under the IT Act.

Nokia, which, as per the Income Tax department, owes it Rs 21,153 crore as total tax liability (existing and anticipated), including penalty during a seven-year period from 2006-2013, had moved the court with its plea for lifting of stay on sale of the assets.

The high court sought responses from Civil Aviation Ministry and DGCA on the plea which has sought a direction against grant of further approvals on the ground that the deal was contrary to the applicable FDI policy and DGCA guidelines.

During the year, the functioning of UK-based multinational accounting firm PricewaterhouseCoopers (PwC) Pvt Ltd and its network audit firms in India came under judicial scrutiny with the apex court agreeing to hear a petition for a probe against them for allegedly indulging in financial irregularities and fudging of accounts.

The court issued notice to Centre, RBI, Central Board of Direct Taxes (CBDT), the Institute of Chartered Accountants of India (ICAI), PwC and the audit firms sharing its brand name saying the issues raised in the petition need "examination".

In the issue of arbitration proceedings of dispute between Antrix Corporation, the commercial arm of ISRO, and Devas Multimedia regarding scrapping of 1,000 crore deal for scarce S-band spectrum, the apex court held that it can take place at International Court of Arbitration in London.

The court had dismissed Antrix's plea which had contended that according to their agreement and tender conditions, the place of arbitration was Bangalore and sought seeking its direction for conducting arbitration proceeding in India.