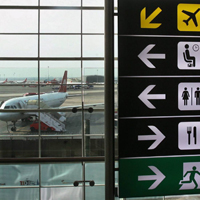 The global accident rate for 2010 equated to 0.61 aircraft hulls lost per million flights, an improvement from 0.71 in 2009 and beating the previous record of 0.65 set in 2006, the International Air Transport Association said in a report.

There were 17 accidents involving Western-built jets, down from 19 the previous year. However, there were 94 accidents for all types, eastern and western, slightly up from 90 in 2009.

IATA director-general Giovanni Bisignani hailed the improvement in safety as something to be proud of but signalled there was no room for complacency.

"Our target is zero," Bisignani said of the accident rate.

"Every fatality is a human tragedy that reminds us that we must do more, and we are working together with regulators, with civil aviation, with manufacturers," he told the Foreign Correspondents' Club of Japan.

Of the accidents, 23 involving all aircraft types resulted in deaths versus 18 in 2009. Total deaths rose to 786 from 685 the previous year.

By region, Africa had the worst accident rate for the second straight year with 7.41 hull losses per million flights, though down from a rate of 9.94 in 2009. It was followed by Latin America and the Caribbean, where the rate rose to 1.87 from zero the previous year.

A hull loss is defined as an accident in which the aircraft is destroyed or significantly damaged and is not repaired.