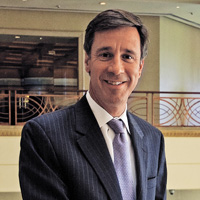 The US-based Marriott International Inc. plans to have 100 hotels under its portfolio in India by 2015. The global hotelier has initiated talks with real estate owners to trigger its ramp-up from the existing 11 hotels. It plans to launch hotels under seven of its brands, including Ritz-Carlton, SpringHill Suites and its moderate-tier brand Fairfield Inn & Suites.

Arne Sorenson, president and chief operating officer, Marriott International Inc., considers India a lucrative market, which is yet to be explored fully. China is another market that Marriott has zeroed in on. India survived the economic downturn better and the recovery is more certain compared to the rest of the world, says Sorenson. With 41 projects under its fold, Marriott is looking to create 8,000 jobs in India in the next three years, Sorenson tells BW 's Nevin John. Excerpts:

The economic downturn has dented the balance sheets of most corporates. How far has the hotel industry recovered?

Economic downturn was tougher than anything the industry has faced. After the fall in 2008-09, we have reached the upward trajectory this year. The markets are becoming stronger and sectors are seeing improved demands. Next year is expected to be better than 2010 and I think, we will reach the 2007 level in a couple of years.

Marriott has renewed its interest in growing economies such as India. Is it because of saturation in the developed markets and the fall of economies during the downturn?

For most companies, markets like India and China became important after the downturn. India survived better and the recovery is more certain compared to the rest of the world. The business activities are back in track. Nowadays, there are more business trips to India from the US and Europe. JW Marriott will certainly look to cash in on this opportunity. Our ramp-up plan of 100 hotels is in sync with the growth of the Indian economy. We have 52 hotels operational in China that will be doubled in a few years.

Will you hold any equity in the properties in India?

Usually, we run hotels in partnership with real estate owners. That doesn't mean that we will hold an equity in the properties. Out of the 11 hotels in India, we don't have any equity in any of them. But we look forward to owning properties here in future. I can't say when and where.

What is Marriott's revenue model?

What are your growth plans in India and how many jobs will be created?

Recently, we signed management agreements for seven hotels including five Courtyard properties, a Marriott hotel and a Renaissance property. Marriott will have 41 hotels in India by 2013, creating more than 8,000 new jobs, ranging from entry-level to managerial. The just-opened Marriott property in Pune alone has created 700 jobs.  With the opening of 100 hotels, we expect a significant jump in our revenue from India.

How is the competition from domestic hoteliers?

You have great hotel chains such as Taj and Oberoi. They are improving the training programmes and bettering the processes. Also, many of our international competitors are present in the market for at least 10 years, and they have made tremendous progress. India is a great, growing economy, and as that economy grows, it will need a lot more hotel rooms. We estimate that there are only about 140,000 hotel rooms in India today. That is less than that in Las Vegas.

You are opening many hotels in cities such as Mumbai and Delhi. Will it lead to competition among your own hotels?

We like our hotels competing with each other for betterment. Mostly, we look at bringing in our different brands of hotels in the same city. For instance, our brand like Ritz-Carlton is different from Courtyard and Fairfield Inn.

What is the average revenue per day for Courtyard in India?

Per day cost for staying in Courtyard is $120. We get higher occupancy in major cities. Hotels here produce meaningful revenues. India has the second-largest hotel development pipeline in Asia and is expected to double the number of branded hotel rooms over the next three years. Marriott will offer 900 rooms by 2013.

As a US company, how do you see President Obama's visit to India?

From the US point of view, India is an important market. We know the potential of the economy and the vastness of the consumer base. As it is an open market, Obama's visit will increase the trade between the two countries. The visit proves that India is a safe destination for international tourists.

What are the politico-economic challenges JW Marriott faces in India?

The number of permits and clearances needed to build and operate a hotel in India is many. Most of the time, it is highly time consuming and expensive. This can be resolved by reducing the processes. The government should consider working for a solution to this issue.