'We Will Be Known For The Broadband Highway' 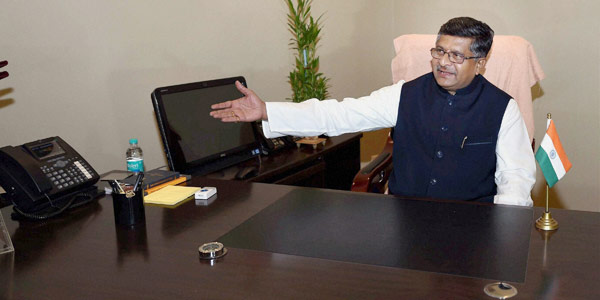 08 November, 2014
Print this article Font size -16+
His plate is quite as full as that of his predecessor. Soon after assuming office, Ravi Shankar Prasad, India’s new minister for communications and information technology who is also the minister for law and justice said: “The Atal Behari Vajpayee government is remembered for the National Highways project. We will be known for the broadband highway.” As part of this, Prasad is looking to improve mobile connectivity in the North-East, Ladakh and the Andaman & Nicobar Islands.
That would be a boost to a wide range of industries that depend on high speed connectivity. According to global internet content delivery company Akamai’s State of the Internet Report for Q4 2013, the average broadband connection speed in India at 1.5mbps was the lowest in the Asia-Pacific region. South Korea leads the pack at 21.9mbps followed by Japan at 12.8mbps and Hong Kong at 12.2mbps. China is more than double of India at 3.4mbps.
He went on to add that, “I am aware of the problems of the telecom department. It has been in the news for all the wrong reasons and one of my first priorities will be to set things right.” Over the last few years, the Indian telecom sector has been hit by regulatory uncertainty that included the 2G spectrum scam. Post that while some telecom operators exited the country, the rest have seen a decline in profits. Prasad wants to make the department transparent.
The two priority areas for the ministry will be to improve the quality of services (QoS) and boosting investor confidence in the country. QoS is a big issue in India where the biggest problem faced by mobile consumers is call drops and lack of network coverage. Prasad pointed out that since FDI in telecom is 100 per cent, it must be used to ensure that more investment flows into the country. “The way things have happened in the past have diluted investor confidence. We need to change that.” Prasad is also pushing for a softer regulatory regime. However, he insisted that those need to be followed by industry.

Hemant Joshi, Partner, Deloitte Haskins & Sells, said the telecom minister appears to have realised the power of telecom as a growth enabler and instrument to serve the masses which can add 15% to India GDP.  The new Government seems to have a strong vision for the telecom industry and want to portray a positive image nationally and internationally. The incoming telecom minister is in favour of transparent, clear and stable regulatory and legal regime for telecom industry in order to remove the uncertainty and policy paralysis masking the telecom sector.
India desperately needs relaxed M&A policy to help in consolidation of the hyper competitive industry and to make investment friendly environment. We expect the new government will fulfill the “Broadband for all” demand through fast implementation of broadband highways across the length and breadth of the country. This will lay ground for good e-Governance model as well as enable growth of other sectors such as healthcare, banking, education, etc, said Joshi.
Focus IT
For the IT department, Prasad said since information technology is an area of great growth. Another focus area for the minister will be electronics manufacturing in the country. That could be a positive in the longer term thanks to potential for boosting employment in the country.
“Manufacturing as a whole needs a big push in India, but manufacturing of electronics sector can be given further boost, which can bring considerable number of employees,” he added. That’s going to take a lot of wooing. Over the past few years, many of the large global original equipment manufacturers have set up shop in Vietnam and Taiwan. That would make it a lot more difficult to get investment in India, more so after problems at Nokia’s manufacturing facility in the country at Sriperumbudur near Chennai.
anupjayaram@gmail.com
anup@businessworld.in
Tags assigned to this article:
politics telecom anup jayaram othertop2 ravi shankar prasad modi cabinet 201 elections broadband highway