'We Want To Export More' 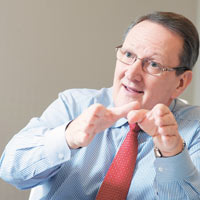 In India too, segments like machine tools are doing well whereas, power and capital goods are seeing a major slowdown. Asia is a very important market for us constituting 27 per cent of our business now, up from 13 per cent just eight years ago.

While you have had manufacturing facilities in India since 1961, nearly half of your India revenues are still generated by trading.  The apprehension has been that SKF India's manufacturing has been geared  to cater to the low-end commoditised part of the business and the parent company has been averse to share technology to manufacture the high-end stuff?
That is not true and factually, it is incorrect. Yes, you are right that nearly half of SKF India's revenues come from trading but the equipment we put in here for manufacturing is world-class and is absolutely the latest technology. If you go to our Haridwar or Ahmedabad factory, the technology is the same as that in Gothenburg, Sweden or Schweinfurt in Germany, Dalian in China or Pennsylvania in the US.

Around 15-20 years ago, our manufacturing units in Bangalore and Pune were mainly geared to serving the automotive market. In the last decade, we invested heavily in upgrading our facilities to exactly the same  standards of SKF which we maintain globally. The Ahmedabad facility addresses the needs of the renewable energy market and is of the same global standard. India is a part of SKF's global manufacturing chain. About eight per cent of what SKF India manufactures is actually exported. Yes, we also import a lot. We want to change that balance and export more out of India. Some segments of the market might not have had certain volumes to justify investment earlier.

But once they hit a certain base number we will make those investments. Why just India? Even in China, where we have more manufacturing facilities than India, 60 per cent of our revenues come from trading.

The other worry has been the significant yo-yoing of revenues of SKF India. What are the reasons for frequent fluctuation in revenues?
You can't run a business on a quarter to quarter basis. You will see fluctuation in business. Last year we opened two new factories. I am here to inaugurate a technical centre. We are making additional investments to open a facility in Mysore. Remember, we have been in India since 1923 and the manufacturing started only in 1961.

In India we operate in all the major technology areas that SKF does globally except for manufacturing of mechatronic products. Our aim is to over a period of time grow the other segments of the market, since bearings is a relatively mature market. We are setting up the global technical centre to develop products for both our local as well as worldwide customers. India is a key part of the SKF global family.