'We Have Competitive Edge Over Korean Products' 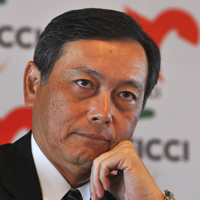 Yen is currently 76 - 77 to a dollar and Japanese companies are already operating around 85-90 yen per dollar. This appreciation of 10 yen is really hurting the Japanese manufacturers and that is why they have to think about shifting their manufacturing base overseas, which is going to be very negative for the Japanese employment situation. If the industries shift abroad the local employment is going to suffer. So how are we going to set the balance between the two is the challenge that the new Japanese government is facing.