‘We Can't All Be Reading Only Depressing Tomes’ 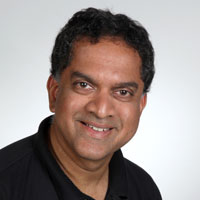 08 November, 2014
Print this article Font size -16+
Tell us a bit about yourself…
I grew up in India where I lived across several towns and cities including Bangalore, Delhi, Bombay and Madras. My father had a transferable job and as a result, I was never been in the same school for more than two years. I'm a chartered accountant and now work as a private banker with a Singaporean bank at their Dubai representative office.
How much of yourself have you included in Jack Patel?
A wee bit perhaps — a dash of banking, the locations, the initial trigger for a handful of situations, but nothing beyond that. There are many differences, too, of course.
You share your initials with PG Wodehouse. Did that inspire you to write?
Ah! If only such small things could inspire us… we would be a very inspired lot.
Why this book? And why should a reader pick up this book?
I wrote Jack is Back in Corporate Carnival as a sequel to my debut novel Jack Patel's Dubai Dreams. It was written during the editing process for the first. 'Corporate Carnival' has been voted by HarperCollins (India) as their 'Funniest Book of the Year'. Isn't that good enough reason for someone to pick it up? Surely, we can't all be reading only dark, depressing tomes.
What does the book mean to you?
It touches my life in some spots. I do relate to much of it: I can actually 'see' some of my friends in it. I had many happy moments while writing it and I hope that happiness will pass on to my readers as well.
How difficult was it to put the book together?
It wasn't, really. I had to pause briefly while I debated how to end it, but apart from that, the writing process for this book was very smooth. I didn't have to do any research either because it is my field or it is based in cities that I am familiar with.
When and where do you write?
Time is a luxury since I have a full time job that is connected with international capital markets. I have to write whenever I get time, even if it is only half an hour at a time. I use a laptop to write simply because of its portability. Place… no, there is nothing specific. I've written in the living room, in the bedroom, at a mall, at the airport, in a plane, in the bedroom, in a park, even in the car while waiting for my wife to come out of the supermarket.
Where all did this book take you?
It was a happy stretch of about 4 or 5 months. Once I crossed the first 20 pages, it flowed quite easily. Every city I have written about, I had actually visited during the time of writing. For some parts of the book, I did borrow a little from two of my former employers.
How did you find a publisher for both your books?
The usual hard way: I wrote to a few of them and waited, chewing my nails off and snapping at anything that moved. I had two rejects initially. Penguin was the first to respond positively and I remain grateful to them for that. With the second book, HarperCollins India got back within just two weeks. It has been a nice, pleasant ride with them.
What’s your energy drink?
Adrak chai with extra ginger and added sugar!
What makes a book a really good read or a bestseller?
To each his own, I guess. Personally, I find it difficult to read serious books unless it is treated with at least a slight undercurrent of humour. What makes a bestseller? We are all trying to find out but we will probably never know. There is really no accounting for it, I think. You can have any number of theories, you can spout wisdom from every pore, you can have decades of experience behind you, but it seems to me that you can be really sure about a bestseller only after it has become one.
What's the hardest thing about being a writer?
I am relatively new to this field, but so far, to be honest, I have found everything hard, except the writing.
What are you reading now?
Chitra Divakaruni's Palace of Illusions and simultaneously, P.G. Wodehouse's Cocktail Time (for the umpteenth time)
E-book or paper format?
Why should there be an 'or'? We go to the cinema halls, but we also watch on DVD. Likewise, I would like to treat it as two available ways of doing something. An e-book would be convenient during travel. But I would rather go to bed with a paper book- well, for now, at least.
So, what’s next?
Actually, I am ready with something! I'm talking to publishers (which is always the scariest part of being a writer!)
(Compiled by Sanjitha Rao Chaini)
Tags assigned to this article:
books harpercollins sanjitha rao chaini authors corner p g bhaskar jack is back in corporate carnival jack patels dubai dreams