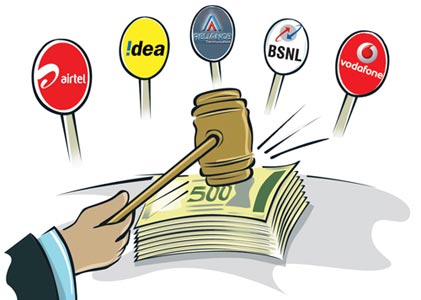 08 November, 2014
Print this article Font size -16+
You can always  expect a twist in the telecom tale. Just hours before telecom operators were to submit their bids for the auction of spectrum in the 1800 MHz band, the Empowered Group of Ministers on spectrum decided to impose a one-time fee for spectrum over 4.4 MHz on operators.

In the name of healthy competition, it also decided to impose a one-time fee for spectrum above 6.2 MHz from 2008 till the time of auction. This will be indexed to the 2001 prices of spectrum (Rs 1,651 crore) using the prime lending rates of SBI. For a government struggling to manage its finances, the net gain of about Rs 30,000 crore from the fee will be welcome.

The other issue of refarming the 900 MHz spectrum is expected to be sorted out at least a week before the auctions start on 12 November. It remains to be seen if operators move court on the decision. That would just be one more entry in India’s telecom policy.

Strictly Business
Data from the Office for National Statistics in the UK shows that the country’s retail story is getting back on track. The volume of retail sales rose 0.6 per cent over the previous month and 2.5 per cent compared to September 2011.