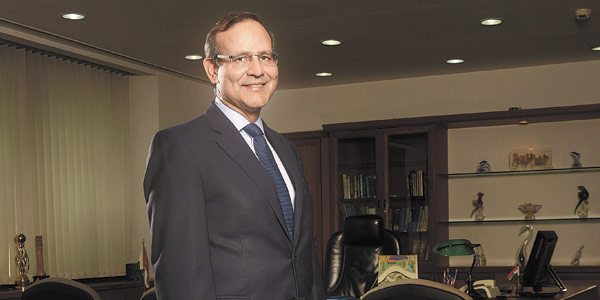 08 November, 2014
Print this article Font size -16+
There's wisdom in looking back and drawing from lessons of the past… It tell us, what may befall on us, if we do not continue to earn our way in the world," said Leo Puri, managing director of UTI Asset Management after an hour-long discussion about UTI and its eventful past.

In an interview to BW's Shailesh Menon, Leo Puri negates the existence of 'old-versus-new divide' in UTI, laments the taint of US-64 and chalks out a plan for UTI's future. Excerpts:

UTI Mutual had no chairman for over two years. How has this affected the fund house?
UTI is a 50-year-old institution. It has very strong institutional processes. Core functions activities like fund management, distribution and client servicing continued unhindered. That's one of the benefits of being a former PSU; things are very rule-based and to that extend processes tend to be well-documented and well-followed. Naturally, there has been some delay in terms of innovation and placing forward-looking bets; and that would be a fair assessment to make. But at no point, there were any risk to core activities of the fund.

The delay in appointment of CEO seems to have strained UTI's relations with T-Rowe Price…
We've good relationship with all our five shareholders. They have all been supportive of what UTI is trying to do. T-Rowe Price (TRP) was helpful when there was not head in place. They continue to supports us by bringing their best practices - especially in areas of investment management and customer service technology. We'll work with TRP to grow our international business.

You have three public sector banks, LIC and TRP as your major shareholders. How cordial is the UTI board room?
UTI is in a transition phase. The idea is clearly to evolve to a professionally managed AMC. Shareholding structure will have to reflect that overtime. Am sure, the decision to offer TRP a stake (by other UTI shareholders) was made keeping that in mind. So there are no issues between our shareholders.

Some of your shareholders have their own mutual funds. Isn't there a conflict of interest?
Yes, our other shareholders have their own funds business. It is unlikely that they will have long-term strategic interest in UTI. The right outcome for UTI is that it should be an independent listed entity with a diversified group of shareholders. I don't think we should be dominated by any one shareholder. We'd be better off with a broad-based shareholding. As for our current shareholders, am sure, their investments in UTI have paid off really well. But I'd like to say, we're not part of any large bank or a corporate house. We're the only independent asset manager in this country.

Don't you think you could have done better with a bank or corporate supporting you both on investment and distribution side?
Not having a bank or corporate to support is only a handicap, to the extent that our regulations are still evolving. I'd argue that our regulatory system should clearly separate the role of banks as a mutual fund sponsor and product distributor. The bank should be operating on a pure open architecture system. Not the way they are now, where 35 to 90 per cent of fund house sales through their own banking channels. When bank distributors say they are open architecture, I'd contend they are not. This is not in the interest of investors; it is a regulatory shortcoming. I don't think it is a disadvantage for us that we are independent. People will see us so and they will understand the benefits of tying up with an independent fund house.

You've been losing out to other mutual funds in terms of AUM…
Yes, we've lost our leadership position. But you should appreciate the fact that things have changed in Indian asset management industry over the past 10 years. Competitive intensity is more these days. Now we have strong players, strong brands; there are fund houses with strong distribution capabilities. Also, the distribution pattern has changed - from IFA model to institutional channels. UTI was not able to get off the block quickly. Change in product structure also eluded us. We come from an assured return, close-ended funds background. The trend of open-ended schemes was new for us. The shift to debt also happened very quickly - both on supply side and demand side. UTI always had an equity-led structure. These shifts put us down; and it happened at a time when there was a little bit of temporary hiatus in the ability to take forward-looking bets because of lack of leadership. But these are not excuses to say, we're not happy about where we are. We are keenly conscious of the fact that we need to re-establish leadership. We want to be the most profitable; we also want to be largest in terms of asset under management. AUM is important and we'll not ignore it. We also want to be the most respected and most trusted. No point in being the largest, but viewed with suspicion.

US-64 is still giving you a bad name. Investors think you duped them of their money.
As an institution, we're getting linked with it. US-64 is a double edged sword for us. The NAV breakdown of US-64 has caused scars in investor-minds. Investors may have suffered the trauma, but for a certain generation, it remains a positive association. This segment of investors may have suffered the trauma, but they also acknowledge the fact that US-64 was the best financial product in Indian marketplace for several years. Many households were transformed by their association with US 64. I think US-64 is a reminder that in this business, it is extremely critical to value integrity and transparency. We have learnt from our mistakes. The probability of something happening like that is virtually zero now.

You were a PSU until about eleven years ago. How important is meritocracy in UTI?
My people understand that we are in a competitive environment, and therefore, we need to build meritocracy. Our long term future lies in proving our worth in the market place. For this, meritocracy and performance is the only solution. Seniority is not the issue; experience is only valuable if relevant and if it is put to work with right mindset and behavior. Simply growing old doing the same thing has never been an asset to any institution. I tend to think not in terms of old and new, but in terms of relevance, commitment, loyalty and impact. Merit, rather than seniority, will result in the growth of people here.

Do you believe UTI is an aging institution?
I think we are conscious of the fact that relative to some of our competitors, 'brand UTI' needs to be refreshed. This is a reliable institution, but a little staid. It needs more innovation and relevance to a gen which has grown up without any knowledge or interest in US-64.

What are your future plans for UTI?
The industry is going through tough times. I've to believe in the future of this industry as this is the only thing we do. The camel, after all, has to believe in the desert. This is all we have. We need to grow in terms of geographies. We need to be clearly positioned for retirement and savings pools. We must develop skills to manage alternative assets. If we succeed in these, we'll re-establish our leadership position. Equities will always be the bedrock of our business, but debt will keep us growing. We have plans to strengthen our offshore fund advisory business. We're actively bidding for pension and provident fund mandates. The international business - where we manage the money of foreign investors in Indian assets - will again be a growth engine for UTI in the coming days. We'll look at major markets like Japan, US, Europe, China and the Gulf to raise investor funds. It is hard work, but we do believe it is an important plank of our growth strategies. We currently manage over 2.5 billion across nine funds in this vertical.