'Tum Se Hi' reprise by Alia Bhatt is out!

'Tum Se Hi' reprise by Alia Bhatt is out!

New Delhi [India], Aug 28 (ANI): Ahead of the release of her upcoming movie 'Sadak 2', Bollywood actor Alia Bhatt on Friday shared her reprised version of Ankit Tiwari's 'Tum Se Hi' song for the flick.
The original song for the forthcoming Mahesh Bhatt's directorial road thriller was sung by Ankit Tiwari and Leena Bose.
Today, the 'Highway' actor released another video, where she is seen crooning to an acoustic version of the song by herself.
The 27-year-old star shared the music video on Twitter. 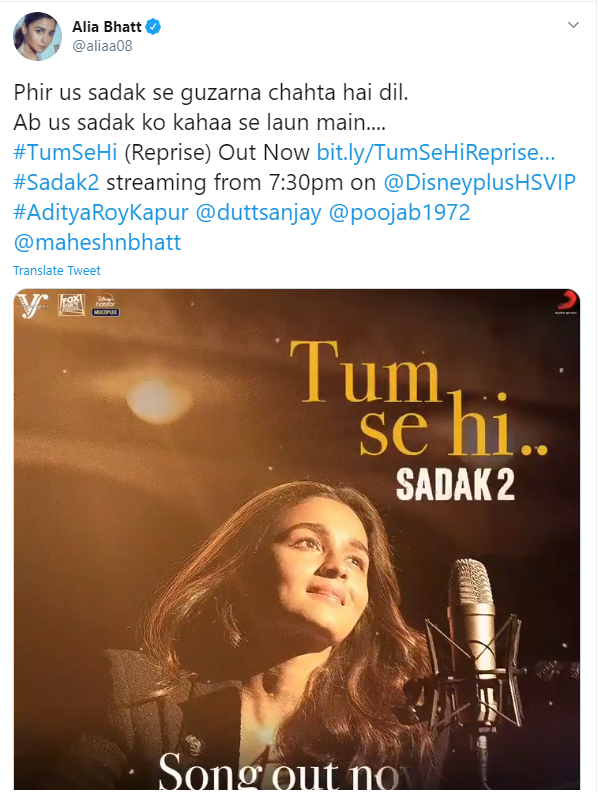 In the three-minute and 26-seconds long video, Bhatt is seen sitting in middle, under the spotlight with a guitar. She is sported in a black-on-black attire.
While she is seen singing the unplugged version, many stills from 1991 released 'Sadak' starring Sanjay Dutt, and Pooja Bhaat, are played in the background screen.
The makers of the upcoming road thriller on August 12, dropped the official trailer of the flick and it boasts space for an emotional roller-coaster ride. The trailer shows the journey of the trio Sanjay Dutt, Alia Bhatt, and Aditya Roy Kapur.
The film that marks Mahesh Bhatt's return to direction after 21 years continues from the plot of 'Sadak'.
Actors Jisshu Sengupta, Makarand Deshpande, Priyanka Bose, Mohan Kapur, Gulshan Grover, and Akshay Anand are seen playing significant roles.
The first instalment of 'Sadak' was also helmed by filmmaker Mahesh Bhatt.
'Sadak 2' is all set to release on the online video streaming platform Disney+ Hotstar on August 28. (ANI)