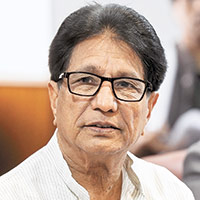 What are the chances of the Tata Sons-Singapore Airlines (SIA) tie-up obtaining a licence to operate an airline in India this time around, considering they have failed to do so on two earlier occasions?
I cannot speculate on what happened and what pressures there were in the past. Ratan Tata may be the best person to ask. However, this time I see no problem whatsoever with the proposed venture. If the two partners do their due diligence, there is no reason for us not to grant them a licence.

Do you think the entry of Tata-SIA will be a positive sign for the Indian aviation sector, since none of the Indian carriers is currently really making money? Would adding another help matters?
There are a lot of complaints and accusations on how we have allowed aviation hubs to develop in many of the Gulf countries (based on Indian traffic) and that we have not developed hubs within India. This was partly because neither did we have Indian carriers that were capable of developing hubs nor did we have world-class airports.

Now, international traffic is growing. If we can have airlines going directly from India to various destinations, why would anyone want to go through Dubai or Qatar or any other place? Tata-SIA, I expect — with the reputation they have, the tie-up they have and their financial muscle — has the capacity to do this.  It will make life easier for Indian passengers and that has to be our main priority.

We don’t have any feeder airlines or even regional airlines in India. Even though we have allowed international flights from many small airports across the country, very few airlines have regular services. Even today, most passengers from smaller places — say Ranchi or Bhubaneswar — need to come to the closest metro to fly out of India. We’d like to see this change and to see airlines being able to fly people out directly from smaller places and make money while doing that.

Do you think the entry of Tata-SIA will hurt Air India’s operations?
Any new airline entering the space hurts all the others. In any business, and I would say in aviation in particular, no one wants a new competitor.

To what extent has the ‘five-year and 20 aircraft’ rule been responsible for the failure of Indian carriers to capture more of the international traffic, and what was the logic behind this?
I am yet to find any logic behind this rule since many small international carriers with just 1-2 aircraft fly in and out of India. I don’t know what the pressures were at the time. Also, the number of planes you have doesn’t make you any safer, since each plane has to be checked by the Directorate General of Civil Aviation regularly any way. In fact, all airlines in India make more money on international routes. So, we should encourage them. We have moved a cabinet note to do away with the rule.

What is your view on the Tatas simultaneously entering into two ventures with SIA and AirAsia?
It is for the Tatas to decide and see if they can make both work. In many businesses, we see businessmen running more than one company. This is their judgement call.